If you own a PC there’s a very good chance it’s a lightweight and portable laptop, rather than a big and bulky desktop. Those rectangular boxes that are tethered to your desk have been declining in popularity, with laptops now far outstripping them when it comes to sales.

Thanks to an almost constant stream of innovations, the humble laptop has become slimmer and lighter than ever before, while the hardware inside them has become ever-more powerful, while batteries are lasting longer.

Creating a powerful and portable computer is no mean feat, and here we look back at some of the pivotal moments in the history of laptop development, and examine how early machines influenced the laptops of today.

Many people consider the Osborne 1 to be the granddaddy of laptops. Released by Osborne Computer in 1981, the Osborne 1 had a five-inch screen, two floppy drives, a modem, battery pack and a keyboard that was built into the lid.

Although it was big and bulky (it weighed 11kg, which is just over the combined weight of five MacBook Pros), this early computer still has some recognizable laptop features. Sadly, it wasn’t a hit, but it showed the potential of a portable personal computer – for the first time, people were able to carry their computer with them and work on them when traveling.

Up until this point, early laptops were sometimes referred to as ‘luggables’, due to the fact that while they were more portable than a regular PC, they were still large and bulky, and not easily carried.

However, in 1989 the Compaq LTE and LTE 286 were released, and they’re generally regarded as the first notebook PCs, as they were around the size of a paper notebook. These smaller laptops were easier to carry around, making them more popular with people who travelled a lot.

They were also two of the first laptops to include a built-in hard drive and floppy disk drive, making them even more versatile. The hard drive in the Compaq LTE offered 20MB of storage space, which was doubled for the Compaq LTE 286.

1989 also saw Apple release its first laptop device, and while it wasn’t as small or as easy to carry as the Compaq LTE (it was still considered a ‘luggable’ device), it offered very good battery life and decent screen – something modern MacBooks are still renowned for.

Due to its size and weight it wasn’t a popular device, but it did spur on competitors to release Mac-compatible laptops that were more portable – these days it’s strange to think of any other company other than Apple building Mac hardware.

In 1991, Apple released a series of PowerBook laptops – the PowerBook 100, PowerBook 140 and PowerBook 170 – which were far more successful than the company’s previous attempts at creating a portable PC, and they ushered in a number of revolutionary features that have become staples of modern laptop design.

For example, the keyboard was positioned towards the back of the bottom half of the laptop, providing room at the front for palm rests and a trackball. Up until that point most laptops had the keyboard positioned at the front, with the space at the back for function key reference cards and instructions.

The included trackpad was also noteworthy, as it provided a convenient way of controlling a pointing device. With operating systems moving away from text-only command line interfaces to graphical user interfaces, these pointing devices would become pivotal. 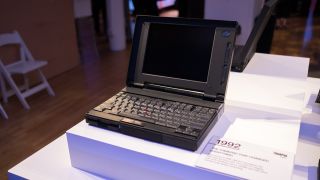 In 1992 IBM released its first ThinkPad laptops, the 700, 700c and 700t, and these, along with the Apple PowerBook 100 series, can be considered some of the first modern laptops, helping to shape the laptop landscape for the next 25 years.

The ThinkPad came with a red TrackPoint in the middle of the keyboard, which was used to control the pointer, and the iconic feature is still found in modern ThinkPads.

The ThinkPad 700 also really showcased what a laptop device could be capable of. It had a full-color 10.4-inch display, which was larger than any laptop screen that had come before, a 120MB hard drive and a powerful IBM 486 SLC processor.

The design of the ThinkPad was both stylish and functional, and it won a host of design awards. IBM was keen to highlight how well built the ThinkPad was in a series of promotional events, with, for example, the laptops being used by archaeologists in Egypt. The ThinkPad 750c was taken into space by NASA, proving just how capable these modern laptops were.

With innovative features and design choices used to overcome the technological issues of the time, these early laptops paved the way for the modern machines we now use daily, and it’s these early pioneers we have to thank for making laptops the brilliantly versatile devices we have in our homes, schools and workplaces.