Update: Could a new model of the Apple TV be around the corner? Head to our new Apple TV 2019 page to see what we want from a new iteration on Apple’s streaming set top box. Otherwise read on for our comparison below…

Apple is finally joining the civilized world of 4K Ultra-HD with its new Apple TV 4K, a new streaming box that can output the higher resolution in conjunction with HDR.

It’s something that probably should’ve happened back in 2015 when Apple announced the new-and-improved Apple TV, but hey, it’s better late than never, and now Apple can make use of the newer standards that have emerged in the meantime.

If you just purchased the original Apple TV or are looking to buy into the Apple streaming video ecosystem for the first time, you might be wondering which of the two sets are right for you. Conversely, if you’re new to streaming video devices entirely, you might even be considering something else – like, say, a Roku or Amazon Fire TV – and we’ll walk you through those options as well.

With so many devices at your fingertips and two of them branded with an Apple logo, it can be hard to sort out which ones you actually need. But we’re here to help. Not sure if you absolutely need an Apple TV 4K? Read on to figure it out.

One of the easiest qualifiers of whether you need an Apple TV 4K is whether you actually own a 4K HDR TV or not – as that’s probably the new box’s biggest selling point.

Only the new Apple TV 4K supports the new technologies, and a lot of its functionality is redundant if you don’t have a television that supports it.

But wait. Just what, exactly, is the big deal about 4K HDR?

4K, also known as Ultra-HD or by its technical resolution of 3,840 x 2,160, simply means that the Apple TV can output around four times the amount of pixels than standard HD boxes can. The HDR part, however, is a bit more important. HDR, also known as high dynamic range, is a technology that allows for TVs to display better, more colorful and much brighter pictures.

Going from SDR to HDR is like upgrading from a box of eight Crayola crayons to the awesome 16-crayon box: there are more colors available to choose from and those colors are be brighter and more vibrant than the ones you’re used to.

If you don’t own a 4K/HDR TV (and trust me, you’ll know if you do) or don’t plan on upgrading to one in the near future, you’re probably best sticking with the old hardware. If you do, then the Apple TV 4K is probably a worthwhile upgrade.

Simple, right? Well before we move on, it’s worth mentioning the neat little feature called Dolby Vision – a souped-up version of HDR that allows for even higher (and lower) levels of brightness and richer colors. Like HDR and 4K, you’ll need a Dolby Vision TV to actually see the images in the new and better format. 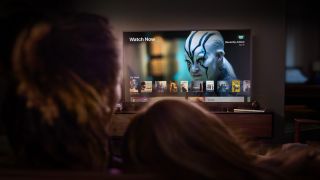 According to benchmarks run by Apple, the upgraded chip helps the Apple TV 4K perform at twice the speed of the original Apple TV and offers four times the performance with games and apps.

The bottom line? If you’re going to use your Apple TV as a faux game console or can’t stand buffer times, you should consider shelling out for the extra power.

As for weight, size and every other physical characteristic (including the amount and types of ports offered) the two are almost identical in every way with the minor exception that Apple TV offers a USB-C port on the back.

We never thought we’d utter these words but, everything considered, we’re a bit surprised Apple isn’t charging more for the Apple TV 4K – especially considering the price of the original.

Where Apple’s pricing model falls apart, however, is when it’s compared to the other options on the market. Roku has a 4K Ultra HD HDR player for $99 called the Roku Premiere+, as does Amazon in the form of the new Amazon Fire TV. For a bit more than the $99 sticker price, you can get a Nvidia Shield, which offers 4K HDR and doubles as a PLEX server, and for $30 less, you can get the Chromecast Ultra which offers 4K HDR for $69 (£69 or about AU$90).

So, is it worth buying the new Apple TV 4K?

Let’s wrap this up in a nice little bow, shall we? If you’re dead-set on buying into the Apple ecosystem and own a 4K HDR TV with plans on doing some gaming on it, the Apple TV 4K is absolutely the system you need. No questions asked.

Even if you don’t own a 4K HDR TV right this second but would like one in the near future, it’s probably worth shelling out a little bit extra now to upgrade to the Apple TV 4K and save yourself the headache down the road.

But, all that said, if you’re not 100% sure about the Apple ecosystem or would like to save significantly on your 4K HDR streaming video player, it might be worth checking out some other options like the Roku Premiere+, Amazon Fire TV and Chromecast Ultra first before you make any decisions one way or the other.

The advantages of the Apple TV models are their integration with other Apple technologies like HomeKit and AirPlay. If your whole household already uses Apple products, this might justify the price premium of the streaming boxes over the competition.