If you regularly make presentations, or you need to show your PC or laptop screen with an audience, then this list will help. The best business projectors will produce large projections with bright and vibrant colors that will help your presentations and meetings really pop and keep your audience engaged.

As well as listing the best business projectors, we also have our very own price comparison tool that will help you find the best prices as well.

Buying one of the best business projectors will mean looking for different features than buying a projector for entertainment, so high resolutions and millions of inputs aren’t going to be quite as important as they would otherwise be.

Unfortunately, plenty of offices often cheap out in when buying business projectors, or don’t put in enough research, which leads to headaches for years to come. Don’t make this mistakes: review our favorite options for your office’s projector unit. 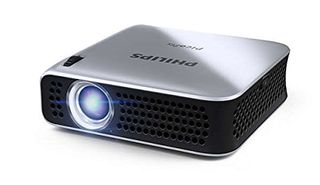 Sure, we’ve reviewed some portable projectors, and many in this roundup qualify as portable, but the Philips PicoPix PPX4010 is impressively small. So small, that you wonder what use case demands it be that small, aside from it being able to easily fit into a your briefcase, or even a jacket pocket.

Philips has created a projector so small it could be used to surprise unsuspecting co-workers who were blissfully unaware that a meeting was in their future.

Selling for an affordable price, it features an easy setup and is able to project content only drawing power via USB. Unlike Philips older PicoPix mini projectors (some of which have appeared on this very list), the Philips PicoPix PPX4010 has a 100 lumens brighness, which means it doesn’t have to be used in pitch black conditions to see, though it’s still not as bright as full-size projectors. 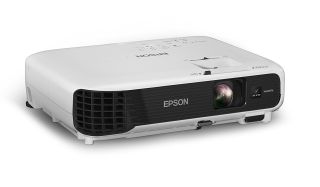 Blacks not as dark as could be

If your meetings are rarely in the same location, you’re going to want a no-nonsense projector that’s easy to carry. For that, we can recommend the Epson EB-S04. Weighing in at 2.4kg (5.3 pounds), and measuring 297‎ x 234 x 77mm, it also comes with a carry case included, which makes this a great business projector for people often out on the road. It supports connecting via USB, WiFi, VGA, HDMI, or the mobile MHL. Not only is it easy to move around with, it’s extremely easy to use, so much so that booting and choosing your input source only took a mere 34 seconds in our testing. This is all with an intensely strong lamp, which maxes out at 3000 lumens.

It is ideal for those who need a simple, portable projector for anything except for streaming video – we experienced quality issues there, with output being either grainy or stuttering. So it’s not the best projector for watching films on, but as a business projector, it’s excellent. 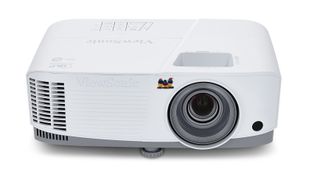 If you’re a small-to-medium-sized business, and need a projector for holding presentations in small rooms, then the ViewSonic PA503S is a brilliant choice. While its 800 x 600 SVGA resolution falls short of full HD, it’s enough to display vibrant images, reports and spreadsheets on a wall or projection screen. It’s got plenty of inputs, is easy to use, and is nice and bright as well.

It also comes with a SuperEco mode that dims the brightness by up to 70%. This makes it more energy efficient (and therefore cheaper to run), while also prolonging the life of the bulb. 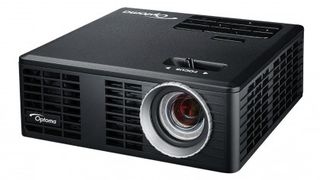 The brightest, nicest and best connected palm projector yet

The ML750e by Optoma may not be the smallest projector we’re talking about here, but it’s a lot more powerful than the pocket-sized PicoPix from Phillips. It weighs in at an ultraportable 380g with a small footprint that makes this easy to carry around. The differences in size between this and the PicoPix are negligible for the power you get in return: a 700 Lumens lamp that lets you present in rooms that aren’t completely darkened.

Not only is it port-rich with one MHL-ready HDMI input, a USB 2.0 slot for thumbdrives, a universal I/O slot, and a microSD card slot, but the ML550 handled our 90-inch test screen with impressive results, and peaked at a 60-inch-or-so size. Much like the ViewSonic PLED-W800, though, the ML750e had us grumbling because you need to buy a dongle for Wi-Fi access. which felt as arcane at the time of this projector’s release as it does today. And in another moment that felt anachronistic, there is no way to work with the projector via a smartphone or tablet. 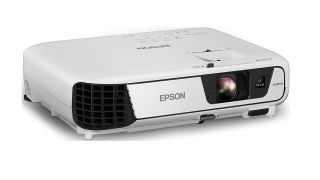 Usually when you choose a portable business projector you have to make a few sacrifices in order to have such a small device – but that’s not the case with the Epson EB-S41.

Epson has an excellent reputation with business projectors, and it has brought much of its expertise to the EB-S41. Its 3,300 lumen brightness is much brighter than many other portable projectors, and means you have more flexibility when setting up the EB-S31 in environments where there is still ambient light.

The EB-S41 is small and light enough to carry around with you on business trips, but it also has a very large projection size – up to 300 inches – which makes this an incredibly versatile portable business projector. 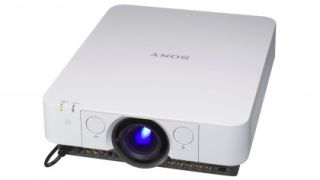 The LG Minibeam PH550G is a brilliant business projector for people who often work on the road thanks to its compact size. It’s also wireless as well, allowing you to connect a smartphone or tablet to it, and showcase your presentations or media quickly and easily.

This is great for impromptu meetings, and despite its small stature, it offers brilliant image and sound quality. If you’re after a business projector that will wow audiences in huge keynote addresses, then this isn’t the projector for you – it’s relatively dim and lack resolution – but for presentations when out on the road, this is easily one of the best. 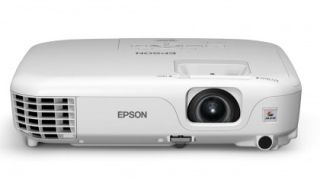 If you’re looking for the jack of most-trades option, Epson’s EB-X11 is a good place to start. The EB-X11 fits into the middle of the pack, with enough features to make most take it seriously. Measuring just 295 x 228 x 77mm (W x D x H) and weighing 2.3kg, the EB-X11 is easy to move between conference rooms, or even buildings.

One feature we were particularly keen on is the lens cover that instantly shuts off the lamp and speakers. The lamp inside the EB-X11 is more adaptable than some because of its relatively high brightness rating of 2600 lumens.

Unfortunately it comes with a handful of flaws. The machine only projects to the 4:3 aspect ratio, and when you’re showing photos (likely with black bars above and below, thanks to that ratio) you’re not going to see the sharpest reproduction thanks to the projector’s low resolution.

Unlike other projectors we’ve talked about in this round-up, the USB slot on the EB-X11 can only handle photos, and the machine has no Wi-Fi options. If all of those red flags aren’t enough to dissuade you, and poor audio quality wouldn’t either, then still consider the EB-X11. 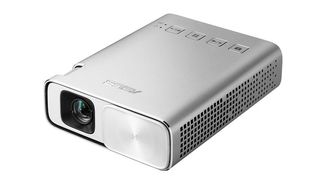 The Asus ZenBeam E1 is a beautifully designed pocket projector that’s small and light enough to carry around with you if you often make presentations on the road.

Despite its small size, it can project images up to 120 inches in size, and it has a built-in 6,000mAh battery that can power the projector for up to 5 hours, which makes it rather flexible, as you don’t have to worry about finding a plug socket to power the device. In a rather nice touch, the projector can also double as a power bank for other mobile devices.

The Asus ZenBeam E1 isn’t the most powerful portable projector, but its versatility, ease of setup and eye catching design gives it a place on our list of best business projectors. 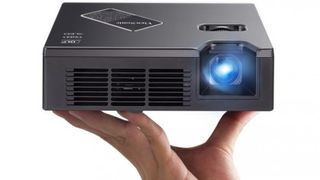 Although it’s less expensive than other ViewSonic models mentioned here, the ViewSonic PLED-W800 still performs well. It earns its price tag thanks to its ultra-portability, weighing in at 830g and measuring 175 x 138 x 51.5mm (W x D x H).

With a lamp that can reach up to 800 lumens, you can still run a presentation in whatever room you can bring it to, provided you can shade the windows and lower the lighting. It comes with an SD Card slot, a USB slot, an MHL-ready HDMI input (for connecting DVD/Blu-ray players and also smartphones/tablets) and a VGA input for laptops.

Much like other portable projectors we talk about here, just because you can pass video through this unit doesn’t mean you should. For its price, though, making you pay even more for an optional Wi-Fi dongle (ViewSonic recommends its PJ-WPD-200, which brings Miracast and DLNA compatibility) feels like you’re getting nickel and dimed.

If presenting Microsoft Office documents is a large part of your practice, and it probably is, the PLED-W800 should stand out thanks to native support for presenting Word, Excel, and Powerpoint files directly from a USB stick or SD card. 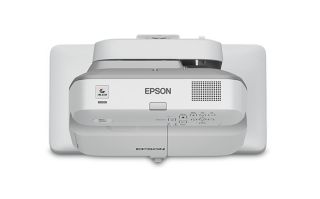 If you really want to wow at presentations, or turn a whole wall into an interactive whiteboard for brainstorming sessions, then the Epson BrightLink 685Wi is definitely worth considering.

It’s an interactive projector that allows people to draw, write and modify the items it projects onto a screen. It comes with a range of software to help you create these impressive projections, and can wirelessly connect to a huge range of devices.

The Epson BrightLink 685Wi certainly isn’t cheap, but it’s a decent investment if you’re looking for a business projector that can be used in a large number of innovative ways.