The TV industry can be a turbulent place. TV technology comes and goes in a matter of years and while a few formats like LED-LCD has stuck around for awhile, they’re always having to justify their existence.

The latest technology to challenge the dominance of traditional LCD sets is OLED – and by all metrics, it’s finally poised to give it a run for its money.

Entry-level models like the LG B8 OLED are finally giving consumers a cheaper choice when it comes to OLED TVs, while more expensive models from Sony and Panasonic are eating at Samsung’s bottom line one OLED panel at a time.

But are we ready for OLED to overtake LED-LCD screens as the new mainstream display technology?  Are they here to stay or will demand burn out like it did for plasma? And which of these OLED TVs are worth their sticker price?

To answer these questions, we turned to some market experts.

TV sales were declining, but OLED is on the rise

It’s been tough for TV makers in recent years, with a global decline in sales to cope with. However, a new report from Futuresource Consulting reveals that TV sales were up by 3% last year, and that value was up by 7%.

Sales were helped by things like last year’s World Cup, but the rising value of TVs is because of increased sales of premium TVs such as OLED.

“OLED is beginning to make its presence felt and will power through the million European shipments mark in 2019,” reads the report, which also states that “rising demand for OLED has helped keep the LG brand buoyant.”

That’s a key point: LG Displays makes all OLED panels in the world, which explains why LG pumps out more OLED TVs than any other. Despite that, the likes of Sony, Panasonic and Philips now seem completely devoted to OLED for their flagship premium TVs.

OLED has found a niche in the premium market, and here it’s likely to stay. And while that might deflate your hopes of spending a few hundred bucks to get a killer OLED in 2019, it’s not out of the question to buy a brand-new OLED for just as much as a mid-tier LED-LCD screen from Samsung.

Want to see all your OLED options? Here’s what’s coming from them in 2019.

While Sony’s screens aren’t completely revolutionary, they’re a combination of slimmer chassis designs, Apple AirPlay 2 and Homekit-compatible, and continue the use of in-screen audio.

All said, its five-strong line-up of Android TV-based OLEDs are some of the most attractive we’re likely to see, due in no small part to their Netflix Calibrated and IMAX Enhanced modes. 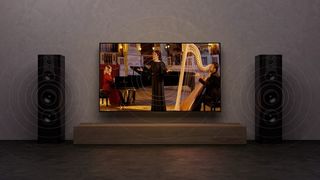 Confusingly called the A9G in North America and the AG9 in Europe, this is Sony’s flagship 4K TV range.

Based on the  X1 Ultimate chip and with a new Pixel Contrast Booster, the A9G/AG9 Master Series feature Acoustic Surface Audio+ tech thanks to actuators that vibrate the screen to generate sound. It’s compatible with Dolby Atmos, and the TV can be used as a center speaker in a home cinema set-up. 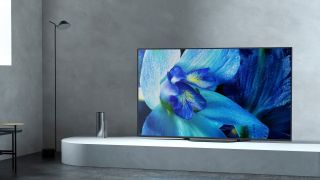 The A8G (North America)/AG8 (Europe) is Sony’s stab at making a quasi-affordable OLED. There is no X1 Ultimate processor, as seen on the AG9 OLED, instead just an X1 Extreme processor. However, design-wise there’s something unique; if you want to place a soundbar underneath, rotate the desktop stand through 180° and the TV will rise-up.

Want to see what Sony has in terms of LED-LCD screens? Here’s the entire Sony TV 2019 lineup

As the manufacturer of all OLED displays, LG has an advantage in bringing to market the latest and greatest OLED TVs. Whether that’s true for the mainstream models is unclear, with rivals producing OLED TVs at least as good, though LG usually kicks-off the year with a headline-grabbing OLED TV that no other brand can compete with. 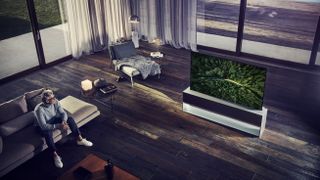 Who needs a flexible, rollable TV? The answer, of course, is absolutely no one, which is handy because absolutely no one will be able to afford this, the most eye-catching OLED TV of them all.

A paper-thin 4K OLED TV that rises from a relatively shallow-looking Dolby Atmos-capable speaker cabinet, the OLED65R features Line View whereby the TV can be half-up to show a news ticker or ‘what’s playing’ music track list on the top section of its panel. Expect it to go on sale late in 2019 for a supercar price tag. 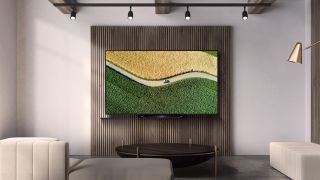 If you jump down to the other side of the price range, here you’ll find LG’s entry-level OLED TVs for 2019, which weren’t mentioned at CES, but are featured as ‘coming soon’ on its website. Due later this year, details on the B9 range of OLED TV are scant; expect Dolby Vision, Dolby Atmos and 4K resolution, but LG’s older Alpha 7 processor. 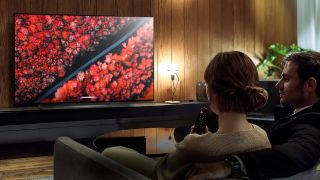 Up one step from the LG B9 is the LG C9 OLED. These mid-rangers will offer a balance of performance and price, without ditching the company’s latest processor. Last year’s LG C8 came with a 2.2 soundbar. 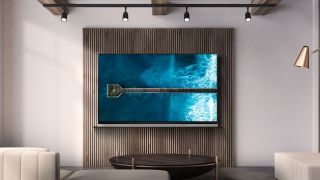 Move up one step more from the C9 and you’ll find the extravagantly designed (and higher-priced) E9 OLED.

Based on 2018’s E Series, expect the same top-end specs as the W9, but with a glass body and tacked-on chassis instead of the W8’s ‘wallpaper’ design. 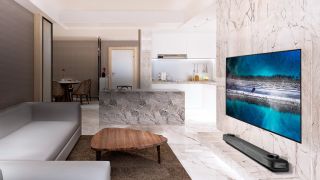 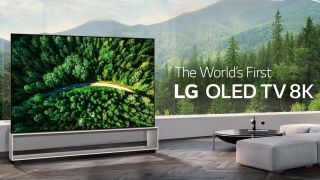 LG’s Z9 range consists of just one incredible 8K OLED TV. Due to be the first such TV to go on sale later this year, the Z9 is an all-in-one product consisting of display and speaker built into the stand. That does seem rather limiting, especially since potential buyers are likely to use it of such an expensive and high-end TV a reference cinema setting. The Z9 will be the first 8K TV to include HDMI 2.1.

Japanese brand Panasonic used to make its own extensive lineup of plasma and LED TVs, but in recent years it’s slimmed down its choice to just a couple of ultra-premium OLED TVs. 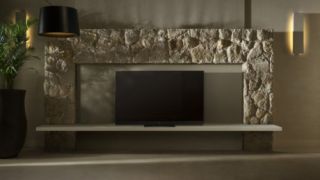 It claims that its new GZ2000 OLED TVs are ‘the world’s most cinematic TVs’, having been tuned by a Hollywood colorist to produce a ‘Professional Edition 4K OLED’ display.

Although it’s dropped Bowers and Wilkins sound, Philips OLED TVs for 2019 feature some top tech. Not least the third-generation P5 processor and every variant of HDR around; HDR10, HDR10+, Dolby Vision and HLG.

Both of these Android-based TVs have four HDMI ports and feature three-sided Ambilight. In fact, the only difference between the Philips OLED 854 and OLED 804 ranges are the differing stand designs. Expect them to go on sale in May 2019.

Read more: Philips TV range 2019: everything you need to know