Arabian Automobiles, the flagship company of the AW Rostamani Group and the exclusive dealer for INFINITI in Dubai, Sharjah and the Northern Emirates, announced today the launch of an AR app that aims to make the lives of INFINITI owners a lot easier.

The INFINITI Driver’s Guide app uses Augmented Reality across various car models to display information that would usually be found buried in the pages of a thick car user manual. With the app, users simply point their phone at a particular button or section of the car to get detailed information of what the button does. 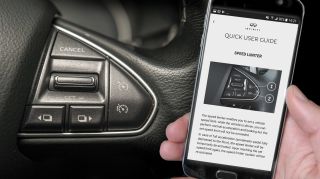 We hopped into the INFINITI QX30 to give the app a quick spin, and sure enough it did exactly what it was supposed to do. You’ll have to first do a one-time download in either English or Arabic for the car model you own, but after that you can simply tap on the app and then point the camera at any section of the car that you need an explanation for.

As an example, there was a yellow ‘A’ indicator on the dashboard, which using the app we found out was the indicator for the Idle Stop/Start. The app works best in bright light for the best recognition, but will also turn on your phone’s flash to aid with detection. It takes a little under two seconds for the app to recognize what you’re pointing at, and as promised you get a full description of what each button or function does, saving you from thumbing through your car manual at all.

The INFINITI Driver’s Guide app is currently available for Q50, Q30/QX30 and QX50 with all other models to be updated by end of March 2019.