Oppo is ready to give your distant subjects an extreme close-up. At a presentation today just ahead of Mobile World Congress, Oppo announced the new camera system that will be coming to future smartphones in the second quarter of 2019.

Its 10x lossless zoom technology will utilizes three camera modules to make it all come together. The main camera is a 48 megapixel, one for capturing everyday images, while a second 16mm, 120-degree wide-angle lens is designed to take in more of whatever you’re trying to capture. 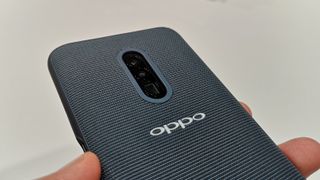 The last is a telephoto lens with a focal length of 160mm, which has been carefully set up in a ‘periscope’ manner. A prism reflects light at 90 degrees onto the sensor, while also stabilizing the image the more you zoom in. According to Oppo, this new setup has improved image precision by up to 73%.

We got our hands on a prototype phone with the new camera, and we came away rather impressed. It’s important to note that you can’t just snap a photo and then zoom into it afterward expecting all the details to remain. The 10x zoom only comes into effect while you’re framing your image, not in-post after you’ve captured it.

Oppo had set us up in front of a town diorama, and we were able to use the demo phone to zoom in on a market scene. Even though we were slightly shaking our hands – on purpose – while taking the photo, the captured image was clear and detailed. Due to it being a prototype device, we weren’t able to test if the lossless zoom worked on video as well.

Scenarios where this level of zoom would be welcomed could be anything from snapping photos at a concert to trying to zoom in on architecture detailing. Zooming in on a subject while trying to retain detail is something that smartphones have struggled with for years, and have only recently gotten better at.

We’ll have to wait and see how Oppo’s new cameras fare when it officially comes out next quarter, but for now it’s a suitably impressive bit of tech that snap-happy users are bound to appreciate.