Samsung has just announced a sporty new smartwatch dubbed the Samsung Galaxy Watch Active, but this isn’t the company’s only recent wearable.

In fact, it has a very similar name to the Samsung Galaxy Watch. So what else is similar? And what’s different?

We’ve compared the two wearables to answer your top questions and help you decide which watch is for you. 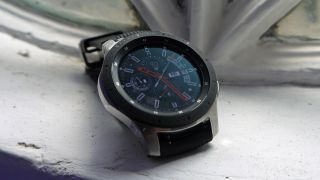 The screen size you get depends on the watch size you pick, with both 46mm and 42mm versions available. The size you pick also affects the strap, with 22mm straps used for the larger model and 20mm for the smaller. While it comes with a silicone strap, you can swap that out for any standard pin-based watch strap.

The body of the watch is metal, and it has a handy rotating bezel to help with navigation. It’s a substantially-sized thing at either 41.9 x 45.7 x 12.7mm or 46 x 49 x 13mm (depending on whether you go for the small or large option), but it undeniably looks high-end.

Everything is a little simpler for the newer Galaxy Watch Active. There’s one size, which is a 40mm body with a 1.1-inch display. You’ll get a 20mm strap with that, but we don’t currently know what the precise dimensions of the watch are.

The interesting change here is there’s no rotatable bezel. That allows for a smaller overall design than the Galaxy Watch, and that’s partly why Samsung is considering this as a more fitness-focused device.

While the standard Galaxy Watch isn’t as focused on fitness as the Galaxy Watch Active, nor is it lacking in that area, as it has a heart rate monitor, GPS, an altimeter, a barometer, and it’s waterproof, so you could wear it in the pool if you so desired.

It can track 39 different exercises, with six of them auto-tracked, and it can also track your sleep, measure your stress and vibrate on your wrist to remind you to move more.

The Galaxy Watch Active can do all of that as well, but it also comes with a new (seemingly helpful) stress monitoring feature that uses the heart rate tracker to give you a clear picture of your stress levels throughout the day.

If your stress levels peak, the watch will nudge you to perform a few breathing exercises to try and bring them down. It’s more of an overall health feature rather than a fitness innovation.

The company has also said the wearable comes with a blood pressure monitoring feature, but we’re yet to understand how that fully works and it wasn’t something we were able to test out on our limited time with the Galaxy Watch Active.

The Samsung Galaxy Watch is a wearable that just keeps on going, with battery life of around four days in our tests. At least, for the larger model with its 472mAh battery. The smaller model has just a 270mAh battery, and despite its smaller screen, it’s only rated for around three days between charges.

As for features, highlights of the Galaxy Watch include NFC, which lets you make use of Samsung Pay for contactless payments. It also has Samsung’s AI assistant Bixby baked in, and optionally comes with LTE, meaning you can get calls and texts on it without it being connected to your phone.

We don’t yet have a clear picture of the specs that are available on the Galaxy Watch Active, sadly, though we’d be surprised if any from Samsung’s prior smartwatch weren’t included in its new fitness version. 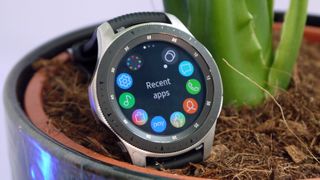 Both the Samsung Galaxy Watch Active and Galaxy Watch run Tizen, which is a rarity on smartwatches – pretty much only Samsung devices, really – but it’s an operating system that we like a lot. It also has access to over 60,000 watch faces and a variety of apps.

The Watch Active has a slightly different look as it’s a more recent version of the software but it may be Samsung decides to bring that look to its existing watch in the near future anyway.

That’s because that watch has LTE, which isn’t available on the Watch Active. All the watches come with 4GB of storage though.

The Galaxy Watch Active is set to cost £229 / $199.99 (about AU$415) and we’ve yet to learn how much it will officially cost in Australia. That’s cheaper than the Galaxy Watch cost at first, and it’s an especially good price in the US.

If you opt to pre-order the watch in the US directly from Samsung you’ll be able to get a free wireless charging pad.

The Galaxy Watch Active is cheaper than the standard Galaxy Watch, and while it may have lost its rotatable bezel – one of its core selling points – it still looks to have a premium design.

We’re not 100% sold on the fitness features of the wearable just yet, and the Galaxy Watch itself is already a solid sports watch for the average fitness fan. If you’re looking to save on your smartwatch and you don’t mind the slightly limited design, the Galaxy Watch Active may be a strong choice for you though.

We can’t yet fully recommend the Galaxy Watch Active until it goes through our full review process, which we hope to get underway in the coming weeks.