Sony prides itself on pushing the boundaries in phone design, and it may be that this time next year half of the phones coming to market are using 21:9 aspect ratio displays, which is the big innovation here.

But why would you want such a tall and long phone? For watching video and playing games is the argument made by Sony.

Most film directors intend for their content to be viewed in the 21:9 aspect ratio, so Sony argues that this is closer to the creator’s original vision. It’s not just about the aspect ratio though – this is one of the best-looking screens on any smartphone ever.

This is the follow-up flagship to the Xperia XZ3, but instead of the long-rumored Xperia XZ4 name the company has decided to slim down its branding for an easier to understand Xperia 1.

The company isn’t starting from the bottom in terms of hardware though – this is the most advanced Sony phone yet, taking a lot of what made the Xperia XZ3 great, mixing in a little of the Xperia XZ Premium, and adding a few extra features and quirks we haven’t seen before on a Sony phone.

We’ve tried out the Xperia 1 at MWC 2019, but we’ve only tried a very early version of the hardware. Everything here is subject to change before the phone’s official release, and the phone we held didn’t have a fully working user interface.

We’ve since tried out a couple of screen demonstrations of the Xperia 1 separately, but all of these were at Sony’s booth at the show, so they won’t be entirely indicative of real-life performance. 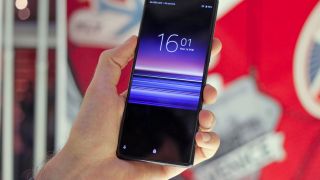 The big upgrade here is the new  21:9 aspect ratio, but not everything else is new, as once again Sony is using a super-sharp 4K display, as it did on the likes of the Xperia XZ Premium.

The Xperia 1 comes with a 6.5-inch display, and while on paper that may sound huge the phone doesn’t feel as big in the hand because of the aspect ratio.

It’s an OLED display with the company’s own BRAVIA tech division working toward improving the panel, so it should be at least a match for the display on the Xperia XZ3.

The company has adopted the 21:9 aspect ratio to give you a wider display for watching films and when you’re looking at photos. The reasoning here is because most filmmakers make their projects in 21:9, so it makes sense to watch in that same aspect ratio on your phone.

If you’re watching other content in a different aspect ratio it will appear with black bars along the edges of the phone, but the company says that shouldn’t happen a lot as almost 70% of films on Netflix are apparently 21:9. Lots of content on other streaming services is also available in 21:9.

We’ve yet to use the screen extensively, but in our short testing period on Sony’s booth we found the Xperia 1 to have an impactful resolution. Films and games on the display were some of the clearest we’ve seen on any smartphone, and we’re almost certain this offer one of the best experiences of watching films on a phone.

We watched a variety of content on the display including film trailers for the upcoming Spiderman and Men in Black films that showed off the display fantastically.

We also watched Fortnite playing on the phone, and the widescreen gives you a noticeably wider field of vision than if you’re playing on traditional smartphone displays. 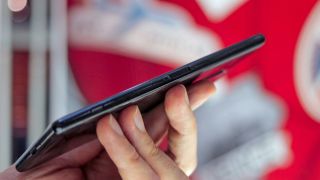 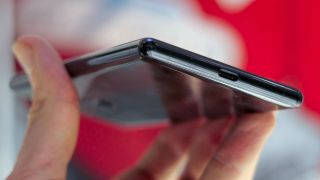 Because of the aspect ratio, the Xperia 1 is a much longer phone than others you’ve seen on the market. It has dimensions of 167 x 72 x 8.2mm, but we don’t currently know how much it weighs.

As we tried a very early prototype, we don’t want to judge how the dimensions felt in the hand at this stage.

Corning Gorilla Glass 6 is used to protect the glass panel on the rear of the phone, and there’s a long border (rather than a notch) at the top of the display to house the important front-facing camera tech.

You’ll have the choice of black, grey, white or purple colors for the phone. The Xperia 1 doesn’t feature a 3.5mm headphone jack, but it is IP68 water resistant, so you’ll be able to let this slip into the sink without worrying about the internals flooding.

If you’re right handed, this sits right where your thumb will likely land but if if you’re left handed it may not be as useful.

Under the hood you’ll find the latest Qualcomm Snapdragon 855 chipset, so you’ll get all the benefits of the top-end processor working behind the scenes, but it’s important to note that this phone isn’t capable of connecting to 5G.

Sony has yet to unveil when it plans to move into the world of 5G, but if you buy the Xperia 1 you’ll have to upgrade your phone in future to make use of that technology.

We’ve yet to be able to test out the performance of the phone, and we don’t currently know how the user interface will work.

Alongside its top-end chipset, the phone has 6GB of RAM, which should be more than enough to keep this phone chugging along. There’s also 128GB of storage so you can fill it up with apps and media.

If you want more space for the movies you’re going to watch on this widescreen display you’ll be able to make use of the 512GB microSD card capacity. The phone also has NFC and Bluetooth 5.0.

When it comes to audio, the Xperia 1 has Dolby Atmos Hi-Res audio built into it and the speakers are, according to Sony, some of the best the company has ever made. We’ll be sure to push them to their limits during our full review, but we’ve yet to hear what they sound like. 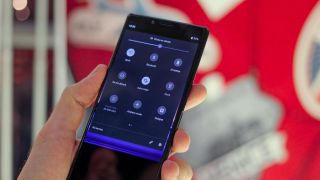 We won’t be able to tell for certain until we’ve got the phone in for review though when we’ll be sure to push it to its limits.

The Xperia 1 marks the first time the company has introduced a triple camera to one of its smartphones. It uses a 12MP wide sensor, 12MP telephoto and a 12MP super wide sensor.

The aim here is so you can take photographs that fit the entire screen. Again, we’ve yet to have time to try out the Xperia 1’s shooter so we can’t judge how the rear or 8MP front camera will work. 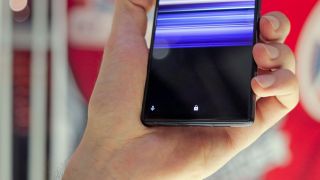 The Xperia 1 once again shows exactly what Sony’s technology can achieve in the smartphone game, and while it won’t be the phone for everyone this may be a great setup for anyone who’s looking to watch lots of films on their commute or have a phone specifically for watching videos.

It’s a bold design choice here from Sony, but if you’re looking for lots of screen real estate it may be one that benefits you.