Projectors get you the cinema experience in your living room. However, you need to be wary when fishing for a great projector sale. Cheap imports often have misleading or flat-out made-up specs. When you get the beamer home you’ll find it’s a lot dimmer, and less sharp, than you expected.

But that’s why we’re here. You can rely on all the projector deals below to provide big-screen bliss, not buyer’s remorse.

Why go for a projector instead of a big screen? Benefits of a projector include a more cinematic experience in your home with a massive image, great resolution and relatively low cost.

You can get a solid projector for far less than a good 65-inch TV. There are some downsides here, too, including caring for a lamp, lower resolution than today’s mid-price TVs and less-than stellar performance in a bright room, but the pros far outweigh the cons.

So what makes a good deal on projectors?

Look we’re not going to tell you how you should spend your money. That’s not our style. But, what we will say, is that the best projectors are almost always Full HD and come with built-in speakers. If you get both those features and aren’t looking to break the bank, don’t spend more than $650 or £500. You can do better for less.

That being said, we’ve found a few great deals this month that we wanted to bring to your attention – hopefully ending your long hunt for the perfect addition to your home theater setup. 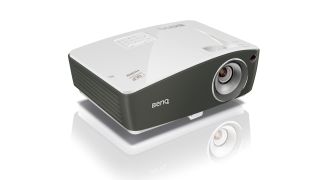 This is the best cheap projector we could find

Not a ton of input lag

Contrast ratio could be better

You can probably stop reading right here. This is the best cheap projector you’re going to find. Sure, the BenQ TH670 might be a bit more than you were looking to spend, but it’s almost impossible to find a better projector in terms of quality versus price. The TH670 has a Full 1080p (1920×1080) resolution, 3,000 ANSI lumens of brightness, 10,000:1 high contrast ratio and built-in speakers. Those speakers could be a hair bit more powerful, but for the price it’s hard to complain too much. The projector is capable of images spanning from 60 to 120 inches across and its lamp is rated for 4,000 – 10,000 hours depending on which modes you primarily use. Input-wise it offers Computer in (D-sub 15pin) x 2 (Share with component), Composite Video in (RCA) x 1 and HDMI. Win! 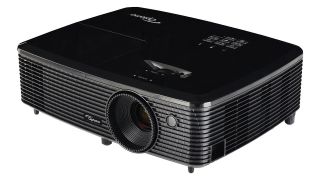 Not the best picture 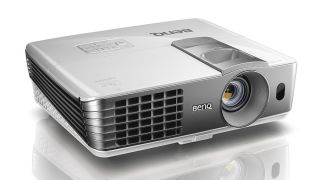 Another BenQ projector? You better believe it

Fan can get loud

Yes, we’re really including two BenQ projectors on this list. While the TH670 is still king of the proverbial projector castle, the W1070 isn’t a bad third choice. We say that because it makes a fair amount of trade-offs. Yes, you’re still getting the awesome 1080p resolution, but you’re also getting the poor 10,000:1 contrast ratio. Worse, though, you’re losing a bit of light output (the W1070 only outputs 2,000 ANSI lumens). At least there’s still plenty of inputs should you need them – 2 x HDMI, component and VGA inputs are all here. That being said, if a good deal pops up on one of these, this shouldn’t be overlooked. 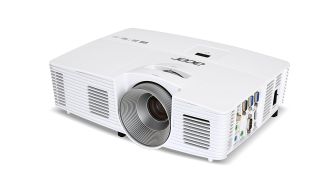 At one time, Acer’s H5380BD was king of the world with its 1280 x 720 resolution and 2-watt speakers. But now there’s a new king in town rocking 10-watts of audio prowess and Full HD. That doesn’t mean you need to relegate Acer’s entry-level home theater projector to the dustbin, however, it’s still plenty capable for most folks looking for something cheap. So where did it go wrong? The H5380BD only has a 720p (1280 x 720) resolution, but at least puts out 3,000 ANSI lumens of brightness. It has a 17,000:1 contrast ratio, but only 3-watt built-in speakers. That said, the projector is capable of images spanning from 300 inches across and its lamp is rated for 4,000 – 10,000 hours depending on which modes you primarily use. Input-wise it offers HDMI, Composite Video, S-Video and two VGA ports. 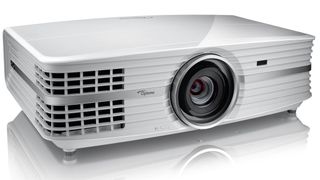 They may have taken their own sweet time getting here, but 4K projectors using DLP technology are finally starting to arrive. The first of these affordable UHD beasts is the Optoma UHD60, a 4K HDR projector that has all the benefits of a standard DLP projector, plus a few of the perks of a 4K flatscreen. The UHD60 is a prime contender for AV bargain of the year, delivering genuine 4K and HDR thrills at a price that instantly leaves many of its rivals with some serious explaining to do. Recently, PUBG Mobile 0.11.0 beta went live with a special event, the much-awaited zombie mode. This is a part of the collaboration between Tencent Games and Capcom that brings together… The Galaxy A9 (2018), which Samsung claims features the world’s first rear quad camera setup, was launched yesterday in India.  Customers can pre-book their devices now, and sale of both… Sometimes it feels like a bit of a fight to the bottom when it comes to SIM only deals, with the likes of iD Mobile, Plusnet and Giffgaff all trying…

O2 has revealed it will use Nokia’s evolved Service Operations Centre (SOC) platform to monitor the quality of service in order to optimise its network. Nokia’s eSOC monitors multiple data…

The Photography Show 2019 hits Birmingham, UK later this week, running from Saturday March 16 through to Tuesday March 19 and incorporating The Video Show. The event promises more than…