“Buckle your seatbelt, the future is about to begin.”

Those were the words of Samsung’s CEO DJ Koh on stage at Samsung Unpacked, the launch event for a phone that’s going to shape the way we use smartphones for the next decade.

Koh was actually talking about the new Galaxy S10 range when he said the above, but it’s far more pertinent to today’s real showstopper: the Samsung Galaxy Fold.

It might sound overzealous, but the Fold is going to be one of the iconic devices of the next 10 years, something that sets the tone for not just phones but portable electronics in general.

Koh alluded to the problem on stage tonight: that there’s a belief there’s nothing left in the smartphone world to inspire users. That’s probably true with the current form factor.

There’s no magical, pinch-and-zoom interface that the iPhone brought. There’s no incredible battery life or awe-inspiring camera. Everything is the much-maligned black rectangle. 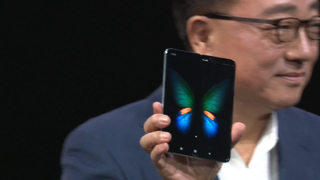 But what we saw on stage tonight in the Galaxy Fold, a handset that folds outwards to show a large 7.3-inch screen, was the Promethean phone that we’ll look back on in years to come, a device that sparked a change in the desires of phone buyers.

There’s a hankering for something new, something innovative, the next ‘big thing’ that’s never satisfied in phone buyers – and a handset that folds out, that’s both a smartphone and a tablet in one, is just the thing for that.

This claim sounds like jumping the gun a little bit, and that’s understandable. The Galaxy Fold is an ugly device when folded down in ‘phone mode’, after all – the 4.7-inch screen sits between two huge bezels, which are even more pronounced given most phone manufacturers are trying to remove them altogether, Samsung included.

The thin screen dimensions make the phone look longer than it really is, but it has to be that way to accommodate the large screen inside, the thing that really sets this Galaxy Fold apart.

The main draw is being able to start a task on the ‘phone’ screen and seamlessly open up the phone to continue on the large ‘tablet’ portion – it looks so impressive, but that doesn’t mean design compromises weren’t made. It looks thick when folded down, in a world of thin smartphones.

We’re talking about a phone that no member of the media got to touch or test – while the handset on stage looked slick and fluid, it could still be full of bugs. That would make sense given you’ll have to wait at least two months to own one, and the demonstrator might have been under strict instructions to only show certain, working elements.

Were that to be true though, it would draw an interesting parallel with the first demo of the iPhone, where Jobs reportedly had to press buttons in a very specific order to stop the phone from crashing.

The one thing I really like about the Fold is that it’s the first phone in quite a few years whose form factor alone will make it stand out and draw attention.February 20, 2019

Perhaps you’re wondering why Samsung is being given the credit for changing the way smartphones. After all, it’s offered a very restricted demo of a too-thick phone with an ugly front.

It’s not the first to bring out a flexible smartphone, and in a month it’ll be joined by a host of other smartphone manufacturers in showing off a foldable phone.

But Samsung has been working on flexible displays for years now, and was the first to demo the technology on stage last year (albeit in a weird, silhouetted fashion).

It’s also got the reputation – if the biggest smartphone manufacturer in the world brings out a radical new concept, people outside of early technology adopters are going to sit up and take notice.

The flexible phone concept needs to be drip-fed into the mainstream, and only brands like Apple and Samsung are capable of doing that at the moment (although it will be interesting to see the impact Huawei has when it shows off its flexible phone next month).

It’s a bold claim to say the Galaxy Fold will be the genesis for the next wave of smartphones, but it seems inevitable that in the future we’ll all be sporting these flexible devices.

Not today though. Not this year. Probably not for half a decade, really. The Samsung Galaxy Fold seems likely to get a limited release worldwide, given the brand didn’t outline big plans for a global release on stage.

What it did say was that the Samsung Galaxy Fold price would start at an eye-watering $1,980 (around £1,500 / AU$2,700). That’s too expensive, and one wonders if it’s on purpose, a way to ward off the masses from buying – and then decrying – a new form factor that needs a few kinks worked out. Early adopters are usually far more forgiving because they have what they want: the new thing.

So my first impression: Galaxy Fold looks very generation 1. Because it is. But you need someone to take this leap to make actually GOOD folding phones real!Folding phones aren’t ready YET but they just leapt way closer.February 20, 2019

Even if it was slightly staged, that demo was impressive. The speed of the device was night and day compared to the buggy experience of the world’s first foldable phone, the Royole Flexpai.

That was a phone that folded outwards, only had one screen, and got confused easily between open and closed modes. It’s also expensive, and it’s certainly not going to be a mainstream device.

What the Flexpai did do is bring that buzz, that feeling of something new and groundbreaking. Seeing a display curve and fold was simply incredible, and Samsung possesses the marketing clout and reputation to get the world to take notice.

So sure, the Samsung Galaxy Fold isn’t going to sell in the millions. Perhaps it won’t even sell in the tens of thousands – but that doesn’t matter. In a decade, when we’re all using flexible electronics as part of our daily lives, it was days like today that put us on that path.

There’s no reason to believe that just because it’s created the Galaxy Fold, Samsung will ‘win’ the foldable war. Apple will certainly have something to say when the technology is mature enough, and there are reams of technologically-capable Chinese brands who will want to bring out something even more impressive.

That doesn’t stop the notion of a phone that opens up to a tablet being super cool right now. You might not buy a foldable smartphone today, but today’s launch could well be the reason you own one in the future.