At the World Government Summit 2019, Majid Al Futtaim announced a new partnership with I.AM+ to bring its voice-controlled AI to the Middle East for the first time. Named Omega, it’s designed to be a conversational, voice first, A.I platform. While similar to existing voice assistants such as Siri and Amazon Echo, Omega is able to understand more complex requests, as well as the context and nature of the request.

It’s essentially a voice platform specifically for the enterprise market, which allows it to be customized and tailored across a variety of scenarios such as entertainment, retail, grocery, fashion, financial services, hospitality travel and more.  The platform is currently being used by Deutsche Telekom and has been deployed in Europe for providing customer care for their customers in German language under the persona of “Tinka.”

The partnership with Majid Al Futtaim is the latest in a strong bid to fulfil the city’s vision for Smart Dubai 2021, as expressed by His Excellency, Omar bin Sultan Al Olama, UAE’s Minister of State for Artificial Intelligence. 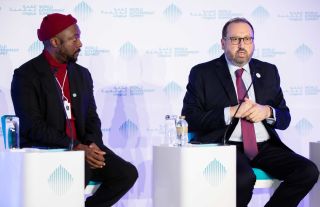 Omega will interact both in English and Arabic, and will allow customers to easily search and book for cinema tickets at VOX Cinemas, or shop for groceries at Carrefour. Customers can string together more complicated requests than current voice assistants can handle, making things much more convenient and efficient. For example, you could dictate an entire shopping list to Omega in one go, and it would add all of the items to your cart, rather than having to add each item as a separate command.

It’s been an interesting journey for Omega, which has been in development for a number of years now. Its launch in the region comes at an integral time for the company, whose founder will.i.am says reiterates the high demand for more intelligent and intuitive assistants. Speaking exclusively to TechRadar Middle East, will.i.am outlined how Omega came about, and how it evolved over the past few years.

“Omega started out as a few different form factors, and one of our investors mentioned that we should be working more on getting the software into as many customer touch points as possible” says will.i.am. “At first I was a bit hurt because we had worked on so much already, but then I realized that it’s okay to pivot to something new. So I came back and told my team and we started working beyond just having it on a smartphone. So in six years we’ve been able to do a lot. Where it’s heading in the future there are still some things within the company that has to happen, but we have to transform with the growing needs as quickly as we can.”

Where Omega aims to differentiate itself from other similar assistants is that it will function as an OS, rather than something that sits on top of another platform such as Android or iOS. This also allows it to more easily adapt to other scenarios such as television sets, small computing systems such as Raspberry Pi, and many more in the future. It’s a bold idea to have for such a young company, but one that is necessary in order to swiftly adapt to customer needs.

Data security is of course, an important talking point. Omega will not transmit back any user data, but will locally analyse and learn from it on the device itself. Third-party access is also not allowed at any time, ensuring that whatever Omega learns from user interaction is kept secure at all times.

The future for Omega certainly seem bright, with the company focusing all efforts on perfecting its platform for mobile devices and televisions, and possibly even a speaker in the future. The goal is to eventually open up its ecosystem to other manufacturers, which will.i.am says will be the best way to ensure that Omega reaches a significant portion of both the enterprise and consumer market.