Over the past year, two popular forums for men who identify as involuntary celibates, or incels, have been banned by Reddit and a domain registrar in response to members’ history of toxic misogyny and celebrating violence against women. Now, some of these men are trying to turn the tables. Members of the incel community—including the official Twitter account for incels.is, a central hub for adherents—have joined with other men’s rights activists, using the content policies of online payment companies such as PayPal as weapons to block female pornographic actors and sex workers from making or spending money online.

The campaign is called the “ThotAudit,” in reference to the derogatory term “thot,” which stands for “that ho over there.” It began over the Thanksgiving holiday as a grassroots effort to intimidate sex workers and women who sell access to private pornographic social media accounts by reporting them to the Internal Revenue Service for tax evasion—without evidence of wrongdoing. But it quickly morphed into a battle over who has the right to make money on the internet.

The harassers are taking advantage of user reporting tools made available by companies like PayPal, Venmo, and CirclePay, in an attempt to force their targets offline and freeze their finances. The tactic has far-reaching implications beyond adult entertainment. Foreign governments and other groups have abused the policies to silence opponents on platforms like Twitter and Facebook for years. Attacking through the payment processors is a new wrinkle on that approach.

When Lily Adams, an actor and model who sells access to her pornographic photos and videos, first noticed the ThotAudit movement gaining traction Saturday evening, she took to Twitter, calling it a witch hunt. Within one minute, a ThotAuditor flagged her account and tweeted that she had been added “to the review list for Monday morning.” By Monday, Adams’ PayPal account had been terminated. In an email to WIRED, Adams said that she had approximately $526 in her PayPal account at the time, and that the company told her it would hold the funds “indefinitely.”

“The feeling of being attacked from all corners is definitely frustrating,” said Adams. By the end of the day, she had been banned from every cash app, and she wasn’t alone. Another pornographic actor and model, who goes by the name Haven Graye online, was banned by Venmo the day after the ThotAudit campaign began. ”118 men called me a prostijew, kike and sen[t] me pictures of people burning,” she told WIRED via direct message. On Twitter, dozens of other sex workers experienced similar harassment and expressed outrage over being banned from multiple online payment service providers, including PayPal, Cash App, and Circle Pay. Many of the women claimed to have lost access to hundreds of dollars, as most payment companies absorb whatever funds were stored in the reported account.

Participants in the harassment campaign openly discussed tactics and specific attacks In r/ThotAudit, a public subreddit. On Sunday, one user detailed a popular alternative to reporting sex workers to the IRS, which the user said was too slow and dangerous: “Find the thots paypal email, send them money, and then report them for selling goods against paypals services… It’s against Paypal’s rules to solicit digital sexual content. All of their funds will be locked pretty quickly.” Users also posted comprehensive “thot auditing field guides,” including a continually updated list of tens of thousands of potential targets, and detailed instructions for getting sex workers banned from PayPal, Venmo, Cash App, Amazon Pay, Stripe, Circle Pay, Snapchat, and Kik.

PayPal did not respond to multiple requests for comment, but its website states that it prohibits PayPal users from buying or selling “sexually oriented digital goods or content delivered through a digital medium.” Venmo, which is owned by PayPal, also forbids users from using the service for “certain sexually oriented materials or services.” Square prohibits using its payment services for “adult entertainment oriented products or services” in any medium, as do Amazon Pay, Stripe, and Circle Pay. None of the companies responded to requests for comment.

Organizers of the campaign against sex workers are trying to capitalize on the increased vigilance of social media companies and payment providers in policing their platforms. Historically, those networks censored individual posts or banned individual accounts sparingly, not wanting to be seen as regulating speech. More recently, though, partly in response to concerns that they are inciting violence or encouraging hate speech, networks such as Facebook and Twitter are acting more aggressively.

The new approach extends beyond Facebook and Twitter to the network of largely unseen companies that make the commercial web function—web-hosting companies, domain registrars, security providers, and payment processors. After a gunman allegedly killed 11 people in a Pittsburgh synagogue, a social media platform he frequented was driven offline for nearly a week when its payment service providers, web host, and domain registrar dropped contracts with the company. A similar fate befell the primary forum for incels in the wake of the related Toronto terror attack carried out by a self-professed incel, and neo-Nazi site the Daily Stormer after Charlottesville. However, most cases are not as clear cut.

Consider the controversies around the ASMR community. ASMR, or autonomous sensory meridian response, is a tingling feeling beginning in the neck or back experienced by some people when they listen to soft or strange sounds—like a woman whispering into a mic, a dry paintbrush on a canvas, or crinkling paper. A booming, highly profitable community has emerged on YouTube creating content that caters to those with ASMR, where (usually female) YouTubers try to trigger the response in viewers. The YouTubers often are dressed in strange costumes or act out scenes that could be viewed as pornographic or sexual in nature. That’s prompted PayPal, which prohibits the sale of digital “sexually oriented” content like pornography, to ban a number of popular ASMR creators, effectively cutting them off from a significant revenue stream.

In the attacks by incels and their allies, activists on Twitter, Reddit, and 4chan have created automated programs to streamline the process of identifying, reporting, and harassing their targets. One program, called the ThotBot, includes the profiles of more than 20,000 alleged sex workers from several social media platforms that include a link to a PayPal account. “Search for bios with paypal in it, if they get banned paypal takes ownership of all the money on the account and it inevitably will be taxed as well,” the creator of the tool wrote in a tweet. In a later message, he claimed that one user of his program reported more than 100 profiles to PayPal.

A later version of the ThotBot claimed to draw from over 100,000 profiles, and was disabled by GitHub a few days after it was created. A spokesperson from GitHub confirmed that the repository and dataset were removed for violating the company’s harassment policies.
In a direct message to WIRED, the creator of this ThotBot said the program aims for the “total excommunication or extermination of whores in society,” adding that he wants them to face the death penalty.

r/ThotAudit, which described itself as a community for “Right Wing Tax Squads,” had nearly 2,000 subscribers before it was banned Tuesday evening. In a statement to WIRED, a Reddit spokesperson said the subreddit had been banned for violating Reddit’s policies prohibiting content that “threatens, harasses, or bullies, or encourages others to do so.” In a sign of how extreme the group’s tactics are, 4chan, the anything-goes forum infamous for being a hotbed of depravity and toxicity, also banned numerous threads created by self-proclaimed members of the Right Wing Tax Squad.

Many of the harassment campaign’s biggest supporters have long complained of being censored by social media platforms and internet infrastructure companies. On Twitter, incels.is, a large online forum for incels, has championed efforts to have sex workers banned from several platforms, while denouncing companies like Reddit and the .ME Registry for doing the same to its accounts. The MGTOW community—a more extreme offshoot of the incel movement whose adherents consider women subhuman—has been in turmoil for two weeks after YouTube banned ads on many MGTOW-related videos and channels, cutting off those users’ revenue streams. Yet, many members of the movement helped instigate the ThotAudit.

Rose, a financial dominatrix who was targeted by the ThotAudit harassment campaign, says digital payment companies like PayPal have long had rules in place prohibiting sex-work-related transactions and frequently suspend the accounts of sex workers whenever it is made aware of their existence. Financial domination is a fetish where the submissive sends gifts—in this case, cash via online payment—to the dominant partner. In a message to WIRED, Rose said many men threatened to report her to PayPal on Tuesday, but she had already been banned by PayPal for using it for sex-work-related transactions. To evade the ban, Rose accepts payments through Circle App, Cash App, Google Pay, and Amazon gift cards.

Organizers of the campaign against sex workers continue to refine their tactics, As of Wednesday evening, much of the discussion among harassers on platforms like Twitter centered around streamlining reports to payment services providers like Cash App, PayPal, and Venmo. In one thread on the subject, an active member of the ThotAudit campaign detailed tactics he said would expedite the reporting process, including spamming webforms with multiple reports, including links to illustrate the breach of the company’s terms of service, and threatening to report the breach to the media if the company did not immediately ban the sex worker.

“This complaint has been logged and will be sent in a package to the media along with others in an ongoing story about how payment processors are ‘selective’ about which terms they act upon,” read the message. “I trust PayPal will do the right thing…”

The Promise Last year, Apple revealed that its Apple Watch Series 4 would come with a built-in heart rate monitor, known as an EKG or ECG. According to Apple, the…

Drivers Wanted The general consensus among experts is we’re headed toward a future in which humans driving cars will seem downright archaic. In a new Vox essay, New York University data journalism…

Master of Reality A provocative new column in Scientific American floats the idea that what’s fundamentally real in the universe — its actual, base reality — isn’t the quarks, fields, and…

Corroborating Stories Donald Trump has aligned himself with the 71 percent of Americans wary of self-driving cars, reportedly telling a number of people he doesn’t trust autonomous vehicle tech, according to Axios. Axios… 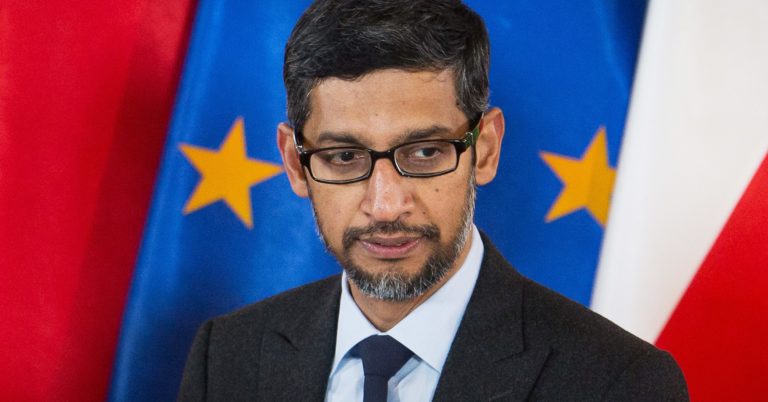 [ad_1] Google is a data-obsessed company, but the recent cascade of employee activism can be hard to quantify. How do you take the temperature of a 90,000-person workforce? In November,…

Shocking Victory Video games and simulators are getting pretty realistic — a video game pro beat a former Formula 1 driver in a race this weekend, without decades of real-world racing experience. In…