Two dozen Amazon warehouse employees in New Jersey were hospitalized Wednesday, one in critical condition, after a robot punctured a can of bear repellent, according to local reports. The news was soon picked up by national outlets and spread on social media, in part because it’s a perfect horror story for the year of our lord 2018.

In total, 54 workers at the Robbinsville, NJ, facility were exposed to fumes. Bear repellent is made with capsaicin, or chili pepper extract; many of the workers experienced trouble breathing and said their throats and eyes burned. All of the injured workers are expected to be released from hospitals soon if they haven’t been already, according to Rachael Lighty, a spokesperson for Amazon. “The safety of our employees is always our top priority,” she said in a statement. The Occupational Safety and Health Administration says it is conducting an investigation into the incident.

Wednesday’s mishap demonstrates the many hazards that workers must contend with in Amazon’s sprawling warehouses, where almost every product imaginable may be in stock—including aerosol cans of irritating spray for warding off bears. This particular accident comes with an added dystopian layer, since it was caused by one of the robots Amazon hopes will replace many of its human warehouse workers in the near future.

But things get much stranger when you realize this isn’t the first time a can of bear repellent has exploded in an Amazon facility. In 2015, the fire department responded to an accident at an Amazon facility in Haslet, Texas, that was caused by a robot running over a can of none other than bear repellent, according to public records unearthed by Jessica Bruder for her book Nomadland, which chronicles the lives of the retail giant’s older, transient workforce.

The New Jersey incident wasn’t even the first bear repellent accident at an Amazon facility in 2018! One employee at an Amazon warehouse in Indiana told WIRED that a can ruptured in his facility earlier this year. The worker says that accident was caused by someone dropping the can and they believe no injuries occurred. They think the way the product is packaged may be the issue; the employee adds that they, too, have dropped the repellent, though in their case it didn’t rupture. “It’s a clamshell that pops open when you pick it up,” says the employee. “What I can say is that our safety people are on it and they are top-notch.”

Lighty, the Amazon spokesperson, confirmed in an email that an incident involving bear repellent did occur at the Indiana facility earlier this year. She also confirmed the 2015 accident in Texas. However, she added, “I do not have exact information on the root cause of either scenario, only that they were different.”

It’s not just bear spray that can cause issues at Amazon. The mishap this week in New Jersey affected a particularly large number of people, but bizarre and tragic accidents happen at the company’s facilities on a regular basis, some more serious than others. In November, two Amazon contractors were killed when a wall inside a distribution center in Baltimore collapsed during a bad storm. Seven months earlier, two people suffered minor injuries at a facility in Ohio after a tornado ripped open a 100-foot hole in the roof. Last September, an employee at an Amazon warehouse in Pennsylvania was run over by a truck and killed.

Accidents happen often at Amazon in part because it’s one of the largest employers in the US. Fatal occupational injuries have also been on the rise across the country, according to the Bureau of Labor Statistics. Amazon does employ on-site medical contractors, at least at some facilities, according to another employee who works at an Amazon warehouse on the East Coast. They are equipped to provide basic medical care, in the case of minor illnesses and injuries. The worker said that a handful of medical staff work each shift at their facility.

Some experts say, however, that Amazon is a particularly dangerous place to work for other reasons. The National Council for Occupational Safety and Health, a labor advocacy group, announced in August that Amazon topped its annual “Dirty Dozen” list highlighting companies that it believes put workers especially at risk because of unsafe labor practices. The organization counted seven deaths that have occurred at US Amazon facilities since 2013, including three at separate locations in the span of five weeks in 2017. (The two Baltimore contractors who died in November would bring the number up to nine.) When the COSH report was released, an Amazon spokesperson told Business Insider in part that, “While any serious incident is one too many, we learn and improve our programs working to prevent future incidents.” The company added that it surveys employees each month to measure their perception of safety in their facility.

In the United Kingdom, ambulances were called over 600 times to Amazon facilities in the past three years, according to Freedom of Information requests filed by the the trade union GMB. A July report from The Guardian found that some Amazon workers have suffered injuries that left them unable to work, and in some cases, homeless.

The Robbinsville facility where Wednesday’s bear repellant accident happened has drawn scrutiny for other workplace safety issues. In 2016, OSHA issued Amazon a citation for failing to report at least 26 work-related illnesses and injuries there. “We take safety very seriously, we do not agree with the findings and will be contesting the citation,” an Amazon spokesperson told CBS Moneywatch at the time.

Have you witnessed a bear repellant-related incident at an Amazon facility? Contact the author at louise_matsakis@wired.com or via Signal at 347-966-3806.

Quantum Tunes A weak radio signal isn’t only a problem when you’re trying to tune in to your favorite radio station, a weak signal is a huge problem for MRIs…

ZuckerCoin Facebook is getting into the crypto business. That’s according to new reporting by Bloomberg. Sources familiar with the project told the business magazine that the social media giant is working to develop… 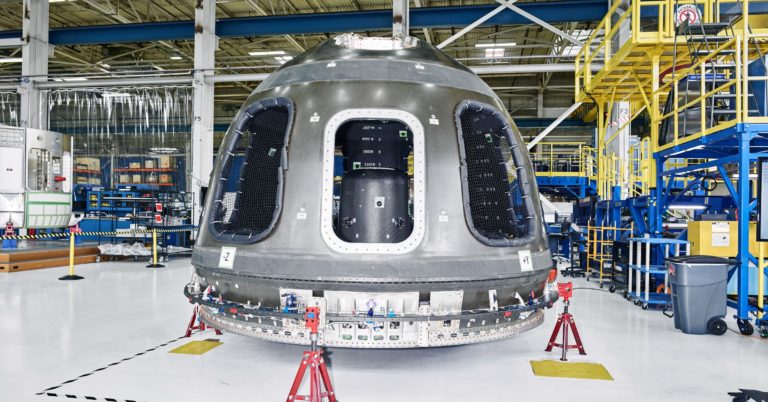 [ad_1] It’s July 17 and the temperature in the West Texas desert is marching, predictably, toward 100 degrees. But the air is cool inside the one-story prefab building where Jeff…

[ad_1] Tech news you can use, in two minutes or less: Microsoft employees protested the company’s treatment of women After a female employee posted about hitting a “brick wall” for…

“Unacceptable” Threat On March 27, India tested a satellite-destroying missile by blowing up one of its own satellites, which was orbiting about 186 miles above the Earth. “The test was…