Christmas is a time to come together with the people you care most about, whether that’s your family, significant other or friends. So what better way to celebrate the holiday season, and embrace the most wonderful time of the year, than to whip your grandmother’s butt at a trivia challenge, wreck her at racing or out-cook her in the kitchen? Suck it, grandma.

Yes, Christmas is a time to get together, but there’s nothing like a bit of chaotic fun to spice things up a bit and potentially ruin friendships forever – and if that’s what you’re after, then look no further, as we’ve put together this list of the 10 best party games to play as a group this Christmas. 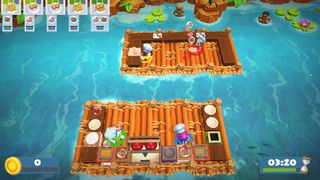 Preparing Christmas dinner is a certified nightmare. You can be sure that either the turkey won’t be defrosted, or that you’ll neglect to turn the oven on to pre-heat, or you’ll forget an integral part of the feast.

Overcooked 2 is equally as chaotic and infuriating. It’s a cooking sim that can be played as single-player or multiplayer – multiplayer is much more fun. You must work your way through various kitchen levels, aiming to deliver meals to starving customers and save the Onion Kingdom. But it’s not that simple, and these aren’t your everyday kitchens – oh no. You’ll be navigating swamps, haunted castles and collapsing mines as you cook.

You can choose to play together in two-player campaign mode, or go head-to-head in four-player versus mode. We advise versus mode with a full house – because nothing brings family together like a culinary disaster. 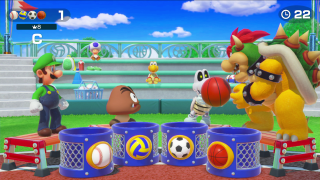 With a host of iconic Mario characters, madcap mini-games and more twists than a particularly twisty pretzel, Super Mario Party provides all the excitement (and rage) of original tabletop games, but for the modern era. 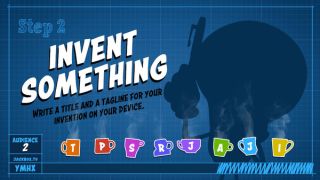 If you’re looking for a party game that’s a bit whacky and doesn’t tie you down to just one title, then a Jackbox Party Pack could be for you. Jackbox Games releases a new pack of party videogames for a variety of platforms pretty much annually, but these aren’t your normal trivia and charade games – instead, you can expect a variety of chaotic spins on classics which allow up to eight players to compete (you can even play from your smartphone, so you don’t need extra controllers).

Jackbox Party Pack 5 is available to purchase from Jackbox Games. 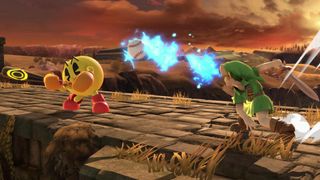 Super Smash Bros Ultimate for the Nintendo Switch has gone down a storm this year, and while it may not be the perfect party game to play with your family (as it’s primarily a fighting title), it should definitely go down a treat with your friends.

Ultimate has more fighters, more stages, and more gameplay modes than its predecessors, meaning you’ll be spoiled for choice as to which Nintendo character you’ll choose to beat down your best pal. 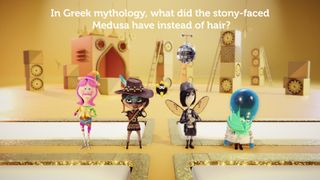 Remember Buzz? The quiz game for the PlayStation 2 with the enigmatic wedge-headed quiz master? Well, If you were a fan of that, then Knowledge is Power is definitely for you – although it doesn’t have the aggressive button-bashing that Buzz did.

Knowledge is Power is a bizarre PlayLink trivia game that covers a range of topics, from history to music to television, and allows for up to six players. As it’s a PlayLink title, you play the game using smartphones rather than controllers, and there are even a few touchscreen challenges thrown in for good measure. 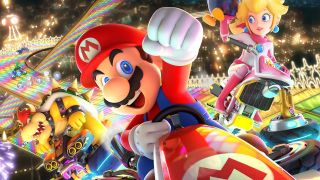 Would a party game list really be a party game list without Mario Kart? Mario Kart 8 Deluxe for Nintendo Switch will let you recapture all the racing nostalgia and aggression we love about the series. Mum got you socks again for Christmas? Throw down a banana skin, that’ll teach her.

The latest Mario Kart adds five new characters and four new multiplayer modes, and has 48 tracks and over 40 racers – so you’re sure to be kept busy over the holiday period.

Mario Kart 8 Deluxe supports two players in handheld mode, and four players on one TV – but you do need extra Joy-Cons for four players. 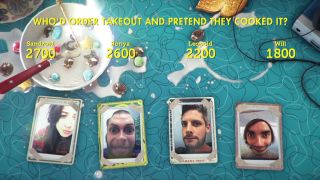 Another PlayLink title, That’s You is a party quiz for up to five players, and is essentially a group version of Mr and Mrs, a TV quiz show for couples that was popular in the UK and Canada back in the day.

You’ll be asked hilarious questions such as “who is the most likely to survive in the wild”, and get points for knowing others players the best. Maybe grandad is a secret survivalist and would spear a trout quicker than the time it takes you to select him as your option – if so you’ll certainly find out here.

Much like Knowledge is Power, That’s You is played using mobile devices such as smartphones or tablets, so you just need to download the app.

That’s You is available from the PlayStation Store. 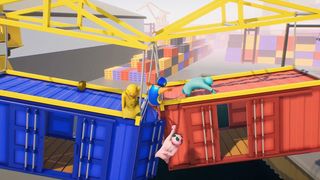 Gang Beasts is arguably our favorite title on this list (and probably the most ridiculous). It’s set in the fictional ‘meatropolis’ of Beef City, where you take on the role of a rubbery character in an effort to defeat your foes through punching them, kicking them, and throwing them off buildings and into fires, among other options.

If you have any pent-up rage against your loved ones, this is the perfect game for working it out in a harmlessly slapstick manner. Gang Beasts can be played by up to four players at a time locally, although it’s as much fun to watch as it is to play. 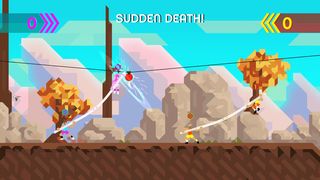 Sportfriends definitely isn’t for everyone – but if you love a game that’s a bit different and 100% weird, then it’s probably for you. Sportfriends encompasses a collection of four retro-style multiplayer games: whacky BariBariBall, Super Pole Riders, ice-hockey-like Hokra, and Johann Sebastian Joust (which is pretty much what it sounds like).

Each title is short, but worth a try simply for the experience – and the chance to joust with your grandparents to some classic music. Some of the games allow for up to four players, but you will need controllers, while Jousting requires the PlayStation Move controllers. 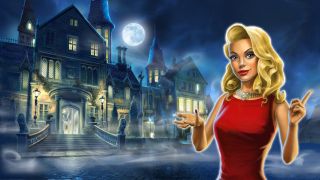 A modern spin on a classic, Clue/Cluedo for Nintendo Switch could be the perfect game if you’re an old-fashioned sort. Essentially the game works just like the board version, but the Switch is the game board – oh, and Mrs White has been replaced by Dr Orchid, which apparently happened a few years ago. Who knew?

You can play Clue/Cluedo with up to six players, and you can even take notes on the virtual clue sheet if you feel like being a professional detective. Sometimes the oldies are the goodies.

You can download Clue/Cluedo for Nintendo Switch from the Nintendo Store. 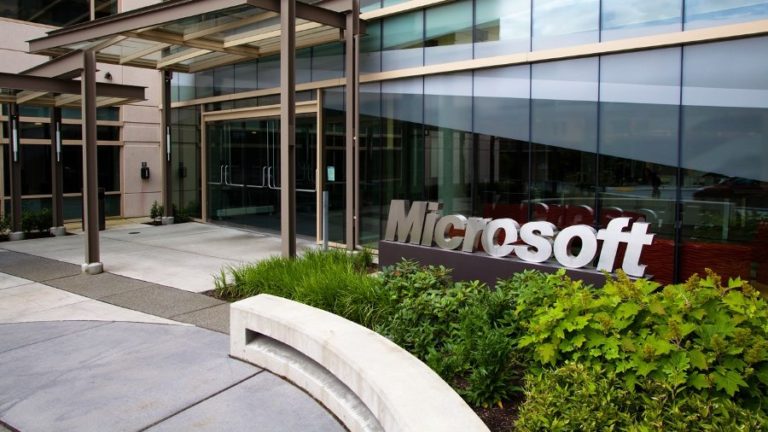 After investigating the November 19 worldwide multi-factor-authentication outage, Microsoft’s Azure team has revealed the root causes of the disruption that affected a number of its users. The team has discovered…

After years of using its proprietary NetTV platform and a small foray into Roku TV, two new 2019 Philips TVs will offer Android TV with Google Assistant, according to Funai,…

Forget flowers and chocolates; nothin’ says “I love you” like a new piece of tech. Your special someone, once they’ve ripped open the gift wrapping, will be glad your gift…

Retro Rewind Your favorite classic video games are getting a killer makeover. But it’s not big-name game developers making the improvements: it’s independent modders. Most game updates require teams of…

The largest hosting provider in Europe, 1&1, has announced that it is joining forces with cloud infrastructure specialists ProfitBricks to form 1&1 IONOS. The new united brand will give customers… 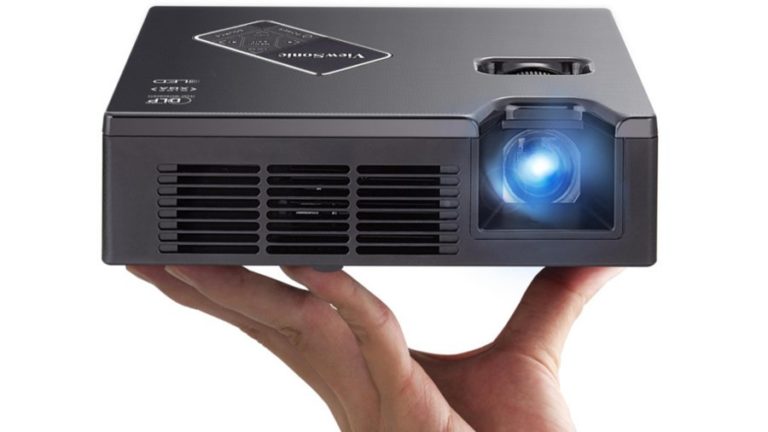