Destiny 2 may have released two years ago, but Activision’s online-multiplayer shooter is still going strong with regular updates breathing fresh life into the title.

But maybe you missed the hype train when it went hurtling through the station and don’t quite know what all the fuss is about Destiny 2 (or even where to start)?

If that’s the case then don’t worry, we’ve created a one stop shop for all of your Destiny 2 questions and the latest Destiny 2 updates.

Make sure you take some time to check out our definitive Destiny 2 review to get an idea of whether or not this is the game for you. Convinced it is? Then you might be interested in our tips and tricks for getting started. Whether you’re completely new to the Destiny universe or just need to brush up on all that jargon, this guide will ease you in. 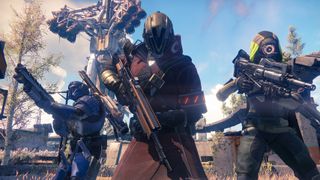 Does Destiny 2 require a subscription? Not exactly. On PC, after paying the upfront charge for the game you can play via Activison’s Battle.net client for free. However, if you are playing Destiny 2 on PS4 or Xbox One, then you will need a PS Plus or Xbox Live Gold subscription to take part in some online activities such as Raids.

The most recent seasonal update for Destiny 2 is Season of the Drifter, which is live now.

Season of the Drifter is Destiny 2’s second Annual Pass season and sixth season overall – running from March to May 2019. 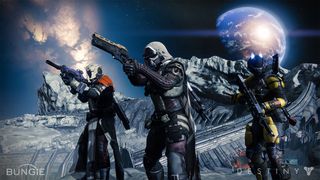 Destiny 2: Forsaken sees your Guardian setting out to avenge the death of a beloved character (no spoilers) and wreak revenge on the one who killed them. Along your way, you will face the new Scorn enemies (undead versions of the Fallen), new PvE and PvP locations/maps, new gears and weapons and a new raid.

If you’re just jumping into Destiny 2 at this point then purchasing the Destiny 2: Forsaken Legendary Collection is probably a good shout, as it includes the Destiny 2 core game, as well as all the expansions to date.

Destiny 2: Warmind continues your Guardian’s journey with a new story based around Ana Bray, a Guardian long thought lost. Bray is searcing for a  connection to her past, leading her to the glaciers of Mars .

“As Golden Age warsats begin slamming into the ice, the glaciers begin to thaw, revealing the core of the Warmind Rasputin – and an ancient Hive army bent on its destruction. Now free, the Hive swarm in service to their god Xol. Help Ana discover her past and destroy the Hive’s gargantuan worm-god before it is too late.”

New features for Warmind include a new raid, weapons, armor, gear, ritual activity, relic weapon, strikes, and much more (including Mars as a destination).

Expansion I: The Curse Of Osiris

Destiny 2: The Curse of the Osiris expansion takes the player to the planet Mercury where they’ll be tasked with getting Osiris’ help to defeat a Vex plot and according to a listing they’ll continue their “Guardian’s journey with all-new story missions and adventures.”

In the game players “journey through time and space to learn the secrets of Osiris, avert a dark future, and rebuild the ties between the legendary Warlock and his greatest student – Ikora Rey.“

Destiny 2 players can use the Ghost Skill to control their in-game guide and companion through their Amazon Alexa-enabled device.

For example, when playing the game it’s possible to say “Alexa, ask Ghost to” and request anything from information on which of your friends are online, what you should pursue next in the game, or find out more about the in-game world. Conveniently, this takes away the need to click through menus for certain actions and has the potential to streamline gameplay.

Voiced by Nolan North the skill is available to download for free from the Alexa app now.

What better way to bring in the new year than to get that fit and healthy feeling with tennis? Yup, Grand Slam tennis is back for 2019 with the Australian…

The Huawei P Smart (2019) is a new mid-range smartphone from the Chinese firm, borrowing some flagship features and mixing them with more affordable components. The P Smart (2019) packs…