The HTC Vive Cosmos is HTC’s third (or really, fourth) headset in as many years. The original Vive set the standard for virtual reality when it came out in 2015… which was then followed by the Vive Pro in 2016 and HTC Vive Focus which debuted exclusively in China last year.

The problem with HTC’s product line, if you’re a fan of gaming at least, is that Vive Pro and Vive Focus were designed for pro users in mind. Sure, both the Focus and Pro can play games – and, in the case of the latter, make those games look great – but they’re not consumer-first headsets.

So why is HTC cooking up yet another new headset? Apparently, it’s all about bringing gamers and VR socialites something to look forward to.

To that end the Cosmos will be a consumer-first VR headset. It will play games, it will offer new social experiences and it will plug into HTC’s new Viveport Infinity game subscription platform.

Details are slim (and some might say purposely obfuscated) but here’s everything we know about the HTC Vive Cosmos, the latest VR headset from HTC.

It’s surprising how similar the Cosmos looks to the HTC Vive Pro – they both share the darker blue coloring and two front-facing cameras. Those striking visual similarities might mean that we can expect the Pro’s specs inside the Cosmos… but maybe not. HTC just isn’t ready to talk resolution, field of view or any of the other hard details.

What we do know for sure is that the headset has side-facing cameras and second-gen controllers that look nearly identical to the ones Oculus made for the Rift. HTC says that the Vive Cosmos won’t need any sensors for it to work, which likely means that the cameras located on the fronts and sides will be responsible for tracking.

Speaking of tracking, what you might notice is that the controllers have a unique light ring along the outside – a neat visual addition that might have something to do with the way the Cosmos tracks the controllers… not that HTC had that info on hand. 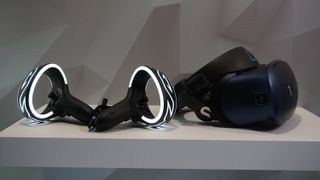 We also know that the Cosmos is going to be a wired headset and that it will at least, at some point, connect to your PC. We say “at least” because HTC, rather cryptically, said that this headset will transcend the computer… somehow.

“The product will work with more than your PC,” says Dan O’Brien, General Manager at HTC. “But we’re not saying what that is just yet.”

“Over the next few months we’re going to give out all the details on this products … but we wanted to tell consumers that we have a new headset that’s going to be easy to set up. We’ve heard from a lot of our consumers that headsets are tough to setup and that they can’t take it with them. That’s what we’re trying to solve with this product.”

It’s almost certain to work with a smartphone too, as a slide showing a phone nestled next to the Cosmos was shown off. We’re not sure why HTC didn’t make a big deal of that one. 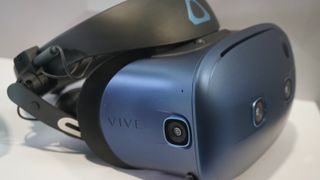 Unfortunately because the Cosmos wasn’t available to try, it’s hard to give any real impression of the hardware outside of what we could see and what we heard from HTC executives; HTC announced it here to build the hype and says that it will provide more details on what it will be like later this year.

Trying to squeeze some sort of information out of O’Brien, however, we were able to get some crucial information. The first piece is that the headset will work with the PC and… well, something else, likely your mobile phone or another device.

That’s obviously and purposely oblique, but it could mean different levels of performance depending on what the Cosmos is plugged into. When asked about where the Cosmos would fit into the Vive hardware lineup, O’Brien wouldn’t quite say – but says that info will be coming at some point in the near future.

While HTC also announced an eye-tracking headset at the show – the HTC Vive Pro Eye – the Cosmos won’t have the ability to know where you’re looking and therefore won’t support foveated rendering – one of Oculus’ biggest advantages in the headset war.

If the Cosmos turns out to be a headset that can be plugged into whatever device you have around – your phone, your tablet, your PC, whatever – it could be a neat solution. But without knowing exactly what the Vive Cosmos is and what it can do, it’s all a big question mark.

HTC is being purposely oblique with the Cosmos. It’s a new headset that will work with a PC… “and other devices” with that last part often said with a smirk.

What we know for sure is that it’s HTC’s peace offering for consumers – a sign that HTC still cares about gamers and VR socialites and should give them something to get excited for in the months to come.

The only question remains over whether it’s enough of a sign, given how little was announced about it. 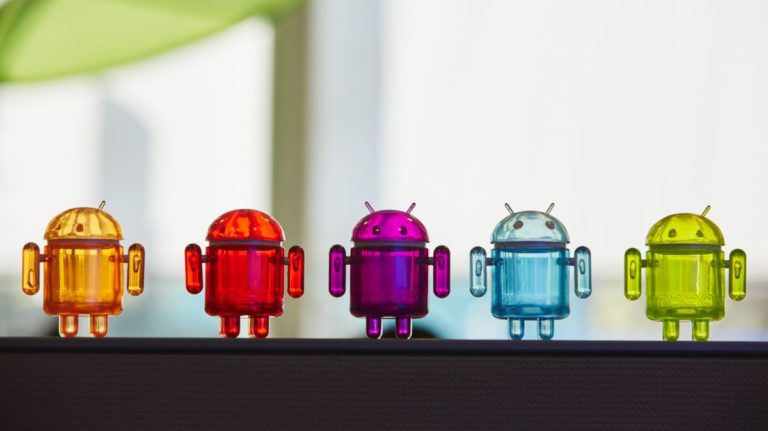 When you’re browsing the internet on your Android phone, it’s easy to opt for either your phone manufacturer’s default browser or Chrome (if they aren’t one and the same). It…

Amazon is launching a new conference dedicated to AI, robotics and automated technology, with demonstrations, talks and workshops on the future of technology. The conference is a follow-on from the… 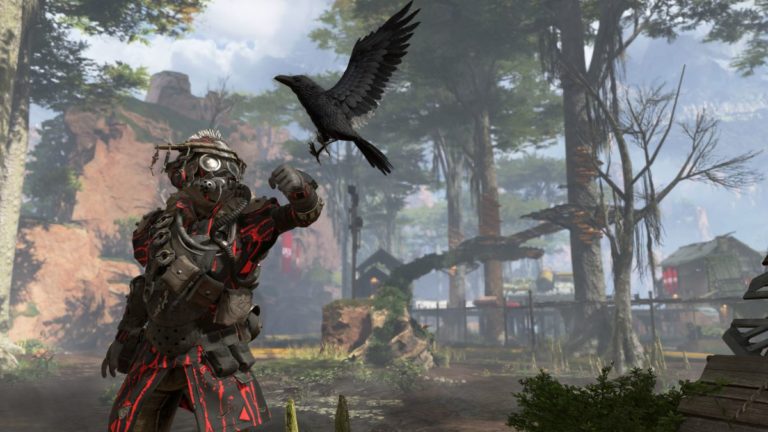 Apex Legends is off to a cracking start, but folks are beginning to speculate on what the future might hold for EA’s battle royale extravaganza – and that could include…

If you’re looking for the best home printer, then you’ve come to the right place. Having a decent home printer means you can easily print off documents, photos, homework and…