After a long drought, the go-go days of hot technology IPOs appear to be back. The new age began last week with the long-awaited public offering of shares in ride-hailing service Lyft, which raised more than $2 billion for the company with a valuation climbing to over $26 billion before falling back to earth on Monday. To put that in perspective, Lyft’s valuation after the IPO rivaled those of Snapchat, Dropbox, and Spotify; it’s larger than all of this year’s IPOs combined.

As many have noted, Lyft is at the head of the march of unicorns. There’s a slew of planned mega-tech IPOs that include Lyft’s larger and more attention-grabbing rival Uber, the work-messaging company Slack, delivery company Postmates, cybersecurity and AI firm Palantir, social media powerhouse Pinterest, and home-sharing company Airbnb. As many also have noted, the last time there was a pipeline of tech IPOs this large and bunched together was in 1999, when companies raised more than $100 billion going public as the tech bubble was at its frothiest. Investors who bought into those newly public companies in 1999 did not fare well. The next peak was in 2007, just before the financial crisis sent markets plunging.

Those rather uncomfortable precedents raise the question of whether the current gaggle of unicorns is a sign of renewed strength or an indication that early investors are trying to get out while they can and play ordinary investors for suckers.

We won’t know the answer for a few years. For now, we know that the initial backers of these companies—the angel investors, the venture firms, the institutional investors, and the corporations (General Motors was an early Lyft backer)—will reap considerable profit as a result of these IPOs. So will early employees and founders who hold restricted stock grants and options, as will the investment banks shepherding the public offerings. Whether the companies themselves and those who buy the listed shares will thrive or suffer is less clear, and anyone contemplating going along for the ride should heed the old wisdom of “Buyer beware.”

Unlike the 1999 crop of speculative IPOs, these high-profile companies have real and growing revenues. They aren’t just hopes and dreams. But most of these behemoths are losing money, lots of it and quickly. In the 1990s heyday, it was all the rage to talk about “burn rate”—how much more cash a company spent in a quarter than it took in. The term may have faded, but not the phenomenon. On average, Lyft loses close to $1.50 every ride, for a total of more than $900 million last year; Uber loses twice that. Airbnb was slightly profitable last year, making perhaps $100 million on more than $2.5 billion in revenue, a relatively thin margin for a public company.

The common response to concerns about bleeding cash is that these are dynamic, disruptive businesses growing rapidly and investing for future growth. That’s a fair rejoinder, with Amazon as a prime example. The company was essentially profitless for 20 years because Jeff Bezos used spare cash not to compensate shareholders but to build the business. Now, Amazon shareholders are reaping the rewards.

This crop of burly unicorns has adopted that playbook as its formula, and the venture capitalists backing them have not, as far as can be told, dissented from that approach. The better-than-expected pricing of Lyft’s IPO, and the amount raised, appear to justify that strategy. By comparison, Amazon was valued at $500 million when it went public as a narrowly focused online bookseller. Even then, it received its fair share of skepticism, but compared to Lyft and these others, it was a minnow.

1999 was also the year of Webvan and iVillage, both of which achieved multibillion-dollar valuations and then sank with barely a trace. The current cohort seems altogether more dynamic and viable. Today’s unicorns also have considerably more revenue, even as they burn massive amounts of cash. IVillage at its 1999 peak was valued at more than $2 billion on less than $20 million in revenue. Lyft generated more than $2 billion in revenue in 2018; if it were valued the way many ’90s dotcoms were, it could have a $200 billion valuation. Of course, overall market valuations are not as frothy as they were in the late 1990s.

Still, this year’s IPO stampede is not entirely a product of how good these businesses are; the demands of early investors and employees for a cash-out certainly play into it. Many VCs have now waited years for their investments in Uber to yield returns, and similar pressures exists for all of the unicorns. VC firms’ need for an exit is a major driver pushing these companies public, as are the demands of employees who can redeem only a portion of their stock grants and options on various private exchanges. Ordinary investors should bear this in mind as they consider the newly public companies.

Going public is one way for early investors to cash out. That may be good for investors and early employees, but it is not necessarily good for the companies. Public markets have different demands, many of which are incompatible with the business strategy needed to build profitable long-term disruptive businesses. Public market investors are less tolerant of years of cash burn and spending; for every Tesla and Amazon that engage public market investors successfully, there are a dozen other companies whose share price sinks with every quarter of unprofitability and every pronouncement of management that it is investing for the future. Dropbox, whose shares doubled from their offering price before falling back, and Snapchat, which is barely half its initial offering price, have seen intense scrutiny of what appeared to be dynamic businesses before they went public. Perhaps that discipline was needed, but it is at the very least a two-edged sword.

We won’t know for years whether this wave represented a windfall for VCs and early investors and a bum deal for anyone buying the shares on the public market. Nor will we know if the dictates of being a public company, from quarterly reporting and scrutiny to regulatory demands, retard and ultimately hobble these companies’ ability to grow. In general, they look more viable than the 1999 vintage, but that doesn’t change the fact that going public now primarily benefits a small coterie of investors and bankers.

The only certainty here is that early investors will see rewards; there’s nothing wrong with that, especially since these companies are generating considerable revenues. But to anyone contemplating buying shares, it is probably best to wait and see unless you can afford to lose money. That might mean forgoing gains, but surely there are other places to look for gains that aren’t so utterly uncertain in terms of where valuation will settle, how markets will digest the business models, and how the companies will adapt to the new demands

To The Moon! The Australian Space Agency wants to leverage the country’s expertise at mining in remote, inhospitable areas — like, you know, Australia — into a new program that would mine…

Mocha-Making Machine Briggo is taking the human barista out of the coffee-buying experience. The Austin-based startup has built a fully automated robotic “Coffee Haus” capable of filling 100 gourmet coffee orders… 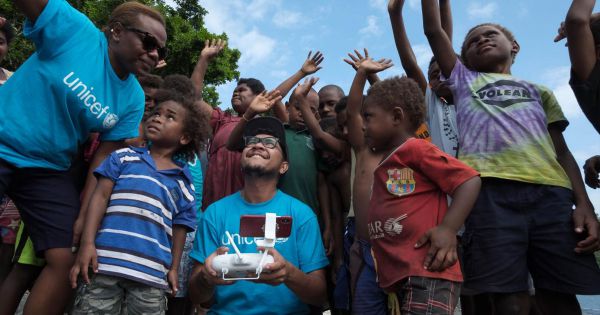 Island Healthcare The remote islands of the Vanuatu archipelago, in the middle of the Pacific ocean, are sparsely populated. Small populations are scattered across a number of islands, separated from…

Antibiotic Bust The world faces a potential antibiotic crisis. A lack of new antibiotic drugs combined with increasing amounts of antibiotic resistant bacteria is setting the stage for a potential…