When Niantic’s Pokémon Go released in summer 2016, it changed the way we play games forever, becoming a phenomenon that not only encouraged Pokémon fans to socializing with others in the real world but actually rewarded you for going outside and exploring your neighborhood.

To date, players have walked a total of over 23 billion kilometers for Niantic Games, made over 190 million friend connections and over three million players have attended Niantic events. To put that in perspective, the distance from earth to the moon is (on average) 384,400km, so Pokémon Go players have walked the equivalent of that distance 59,833 times.

Despite the initial hype dying down Pokémon Go still has a huge community globally that Niantic promises to serve for decades to come – but the studio isn’t stopping there. Not content with merely creating a game centred around the highest-grossing media franchise of all-time, Niantic has now turned its attention to another huge franchise – the Wizarding World of Harry Potter.

Harry Potter: Wizards Unite is essentially the Harry Potter equivalent of Pokémon Go, but with a host of specific magical new features and more of a narrative framework than we’ve previously seen from the studio.

So what’s the story? Set in the present day, Wizards Unite sees the Wizarding World facing an existential crisis which is threatening to explore the magical world to muggles. This “calamity”, as Niantic calls it, sees beasts, people and artifacts from the Harry Potter franchise being scattered across the world and it’s up to players to contain it.

The Ministry of Magic is calling for wizards (aka players) to join a task force in an effort to locate these magical items, dispel the confounding magic surrounding them and return them before muggles catch sight.

We haven’t been told the exact nature of this calamity, and that’s purposely done. Niantic’s aim is for players to gradually pick up pieces of the story as they progress, discussing it with one another and creating a discussion around the game. However JK Rowling isn’t involved with Wizards Unite’s story, so how canon the plot is is arguable. 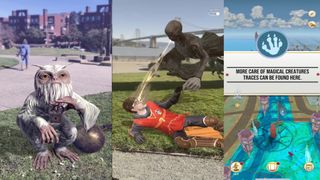 Niantic’s real world platform means Wizard’s Unite map is rendered much like Pokémon Go’s. However, despite being built on the same AR software, the similarities become more distinct as you play.

The Wizards Unite world is a living and breathing map, complete with owls swooping overhead, spell remnants from other players and ingredients to scoop up on your journey. This dynamic map means that a variety of aspects influence the creatures, events and ingredients you come across, including moon phase, weather and time.

However, the first immediately striking aspect of the map is the smoke-spiralling inns scattered throughout the world.

Almost Burton-esque in their long, craggy build, these inns ‘serve’ a variety of cuisine (both magical and British), with each plate giving you more spell energy to use for combat. Some plates give more energy than others, so you are presented with several covered serving dishes and asked to pick one at random.

It’s down to luck of the draw and you have to wait another five minutes before you can pick another – but don’t worry, the world is littered with inns to gather energy from.

Alongside inns, the other notable buildings dotted across the map are greenhouses. Greenhouses reward you with ingredients, used for potion brewing, but much like inns what you get is the luck of the draw.

You are presented with five plants and asked to pull up one to reveal your ingredient prize, again waiting five minutes before you can pick again. These ingredients are then used for potion brewing necessities such as health potions (there will be 10 potions available at launch), with skills such as brewing time, yield and quantity being able to be upgraded as you progress.

These potions will definitely come in handy when it comes to Wizard Unite’s combat, which can prove tricky to get to grips with. The gist of the combat is that you come across beasties and wizards in the world that are protecting the ‘foundable items’ (that’s what Niantic is calling them) you’re trying to track down.

It’s your job to dispel the confounding magic being used on the foundable so you can return it or defeat the witch or wizard that’s causing you grief. Before you begin the battle you can assess the threat level of your enemy to decide if it’s worth the risk.

This is done by tracing the spell symbol shown on your screen, including swiping then urged to defend. Your success is based on the accuracy and speed of your trace (and luck).

While theoretically simple, it can actually prove quite tricky. Dispelling the confoundable magic on unthreatening creatures or objects is pretty straight forward, but on moving enemies it is much harder.

We spent a worrying amount of time trying to kill a werewolf which popped up in London’s Regents Park – each time not quite hitting the accuracy the trace required. But once we got the hang of it (three deaths later), combat became smoother.

Some of these battles are landmark events, which feed into the game’s main story and often see you revisiting a classic event from the Wizarding World franchise – such as saving a Quidditch-clad Harry from a fatal Dementor’s Kiss. All victorious battles reward you with experience, contributing to your overall level, however landmark events are the key ones to keep an eye out for. According to Niantic, there will be over 100 AR events at launch.

But remember, each battle uses spell energy so, to make sure you can keep battling, ensure you visit an inn and snaffle some classic fish and chips. And yes, you will be able to pay real-world money for spell energy, but Niantic insists this doesn’t affect progression and merely reduces waiting times… 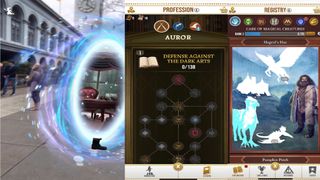 Wizards Unite is more of an RPG than we’ve previously seen from Niantic before, offering the player choices and allowing them to create the witch or wizard they always wanted to be.

This is evident from the start of the game, which sees you creating your Ministry of Magic ID by taking a selfie you can then customize through AR: including adding hats, wigs, glasses etc. You can later choose your specific Hogwarts house and wand for that extra personal feel.

But perhaps our favorite aspect of Wizards Unite is the Registry of Foundables. Each time you dispel a confoundable you obtain a fragment of the item or creature you returned. When you have collected all the fragments, you get a lovely sticker to pop in the registry – a bit like panini stickers.

For example, after saving Hagrid from a sticky situation, we obtained a sticker for him (as he only had one fragment). Meanwhile, Buckbeak required nine in total – so he needs saved nine times in total.

These stickers are categorized in specific families which each have their own experience, so Hagrid and Buckbeak were part of Magical Creatures, while Professor McGonagall would be part of the Hogwarts collection.

Once you’ve collected a sticker or completed a collection, you are awarded with a treasure trunk full of items to aid you on your adventure.

So, that all sounds pretty decent in terms of single-player content right? But what about the socialization part? The crux of Wizards Unite is teamwork and that’s evident in the Fortresses feature.

Much like Pokémon Go’s raids, Fortresses are battles which offer more powerful items but required you to team up with others. At present, you can take on a Fortress with up to four others (making a total of five). However, to take part in these you need to use rune stones (which you obtain from the aforementioned treasure chests) .

However, unlike Pokémon Go raids, there are extra layers to Wizards Unite fortresses. The first is that Fortresses have 10 levels, as you beat each one you progress to the next, more challenging, level. But perhaps the biggest change is the reliance on class (or profession).

Wizards Unite lets you choose from three professions: Auror, Magizoologist and Professor. As you gain experience and gain items, you can invest into progressing in your chosen field. Each of these professions has its own strengths and weaknesses when it comes to battle so, when you take on a Fortress, you should be a bit strategic about how you approach the battle and who takes on which enemy.

Except, at present, it doesn’t seem to have a huge impact (from what we experienced). Fortunately, if you change your mind about your profession, you can change your choice at no cost, while keeping the progress you made in that profession.

Niantic’s aim with Harry Potter: Wizards Unite is to create “your forever Harry Potter game”, promising this will be a long-haul game much like Pokémon Go – they even have post-launch content planned.

There is something inherently magical about walking through London, using a phone as a portal to see into the magical world we’ve read about for years. However, there is a lot to digest with Wizards Unite – potentially too much.

While we only have a release window of 2019, it’s likely we will see Wizards Unite launch in July (as Pokémon Go did), just in time for the young western muggles’ summer holidays.

While Verizon started rolling out 5G for homes last fall, it plans to bring the next-generation communication tech to its current mobile network with a nationwide rollout this year. But… 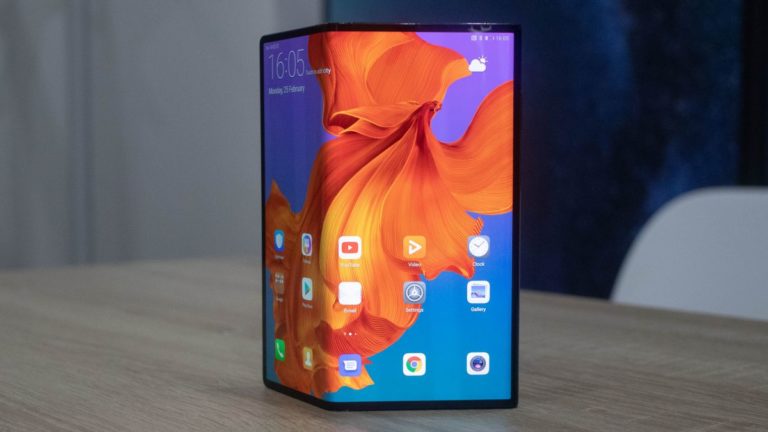 The foldable Huawei Mate X is our best in show pick here at MWC 2019, and we got ample hands-on time with what feels like the future of smartphones. It’s…