The iOS 13 release date is expected to usher in big changes for your iPhone and iPad and, with iPhone sales down, excitement is something Apple needs right now.

The good news is that some features were reportedly delayed to 2019 to focus on the stability of iOS 12 in 2018. So the time has come for major UI and app redesigns.

iOS 13 rumors are still in their early stages. Most of the features we’ve heard about are ones left on the cutting room floor from a year ago. We’ve outlined those.

Update: New iOS 13 rumors shed light on what to expect from the 2019 software update, so get ready for a dark mode, tabs to view multiple versions of a single app and a brand new homescreen. All are included below.

We’ve also listed our own iOS 13 feature predictions. These are new ideas that Apple could include in future software updates, and really should. Most are long overdue.

Here’s everything you need to know about iOS 13 in the lead up to Apple WWDC 2019 in early June.

iOS 13 reveal date could be Monday, June 3, as Apple has historically unveiled its new software at WWDC in San Jose. Actually, we don’t even know that June 3 will be the official WWDC 2019 date. It’s just that last year it was Monday, June 4, 2018, and the year before it was Monday, June 5, 2017. We see a trend here.

iOS 13 developer beta: The first iOS 13 beta will likely arrive at or a few days after WWDC, but it’s going to be restricted to paid Apple developers. You should probably wait for the public beta, which is always more stable.

iOS 13 public public beta: This is Apple’s way of testing features on a larger scale, and that may happen toward the end of June. It’s typically a more refined version of the iOS developer beta, although it can still be rough and never includes all of the features implemented in the final version of the software.

Apple has continued to support the iPhone 5S, the first phone with a 64-bit chipset inside of it. It’s seen six versions of iOS, as have the iPad Air and iPad mini 2. 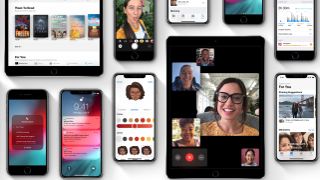 Apple would essentially require devices to have the A8 chipset or newer to upgrade to iOS 13. This also happens to be the chip in the HomePod and Apple TV 4th generation, so it brings everything into line. In reality, it’s in Apple’s best interest that you upgrade your hardware, too. We saw what happened when the company price-dropped its battery replacement service in 2018.

Don’t expect Apple to make an official announcement at WWDC 2019 if the iPhone 5S isn’t compatible with iOS 13. The phone will just show up on a slide, or it won’t. Also, remember that not every iOS 13 feature will come to all devices on that list. Some new ideas may require the TrueDepth camera, a rear dual-lens system, or 3D Touch.

Every two years, the iPad seems to get a flurry of meaningful changes. We saw this with iOS 11 nearly two years ago and iOS 9 two years before that. 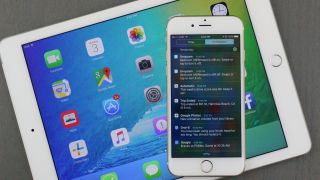 That means – in our minds at least – the iOS 13 update is destined to change up the iPad software, and it may be in an effort to make the iPad a better ‘computer.’ That was our chief complaint of the iPad 11 and iPad 12.9 in 2019. Even if iOS 12 is great on phones, it feels limiting on a tablet when we wanted to do real work.

We’d love to see a ‘Desktop Mode’ to improve our workflow, with a menu and taskbar across the top and bottom. Going along with this is our wish to see Bluetooth mouse support. iOS 13 would, of course, need to include support for a cursor.

The Samsung Galaxy Tab S4 added all of these features in 2018, but with terrible touchscreen execution. Apple could do what it does best and refine an existing Android idea until ‘it just works.’

Interestingly, the latest home screen rumor (more on that below) mentions that it’s an iPad-specific change. Apple could be building its new home screen UI revamp for the iPad before it changing anything on the iPhone.

Expanding on the Apple Files app and supporting external storage would also make the iPad Pro a much more productivity-friendly device, as would the long-rumored multi-user support. iPads, after all, are often shared among family members.

iOS 13 may bring the first-ever major changes to the iOS home screen, and it’s overdue. We’ve had this app tile layout since the first iPhone launched in 2007. It works, sure, but it’s also a bit stale. 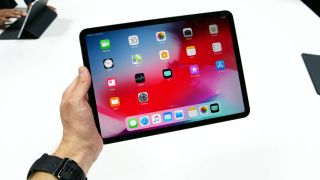 While last year’s rumors mentioned a home screen refresh, it didn’t go into detail about the potential changes. We’d, however, envision parts of the current Today screen (that leftmost widget-like screen) making its way onto the home screen.

Being able to peek at snippets of information – the 5-day weather forecast, your next calendar appointment, and the latest Apple News headlines – would be a welcome addition to the unchanged iOS app grid.

When talking up Apple Watch face complications, the team behind it used the words ‘glanceable information’ a lot. That would be a natural fit for the iOS 13 home screen.

However, the newest iOS 13 rumors suggest that this is an iPad-specific change. We’ll have to wait to see if the iPhone can get in on the home screen UI changes, too.

iOS 13 may in fact be the update in which Apple finally comes through with the long-rumored ‘dark mode.’ We’ve been hearing about it for a number of years.

Apple introduced a dark mode for macOS Mojave at WWWC last year, so it’s fitting to hear Bloomberg report that iOS 13 is going to do the same for the iPhone and iPad in 2019.

If the rumor is accurate, this will make it easier to look at apps at nighttime. There’s a lot of white and bright hues among current app color schemes, so toning them down would be a great way to compliment the blue-light-reducing Night Shift mode.

Apple’s camera app is extremely basic. It’s been a blessing and a curse. It’s easy for less tech-savvy iPhone owners to use, but more advanced users are missing out on features that would let them fine-tine their photos and videos. 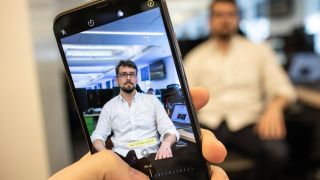 A revamp to the camera app was also among last year’s leaks, and that’s the change that piqued our interest the most. The Samsung Galaxy S9 has the ability to snap a photo with gestures, while the LG V40‘s video tools allow you to fluidly zoom into anywhere on the screen, not just the dead center. The Google Pixel 3 has added a Night Sight mode that aims to end the need for a frequently-photo-ruining flash.

Expect Apple to keep the camera app streamlined, but sprinkle in more advanced tools. And if all we get is the ability to change resolutions and frame rates from within the camera app (and not in the settings menu), that’d be good enough.

Health and Activity apps on the iPad

Your health and fitness data deserves to be seen at 9.7 inches and 12.9 inches, and that’s what we’re hoping for from the iOS 13 update in the coming months.

Both the Apple Health app and Activity app (the one with the rings) present a lot of data to comb over, and seeing bars, graphs, running maps, and various numbers stretched out on the big screen would be ideal. Right now, both apps are limited to the Apple Watch and the iPhone.

We think Apple will do this eventually. Doctors could review health data with patients more easily, for example, and senior citizens have complained to us that their iPhone is too small to read all of the health data. We’d also like to see both apps on macOS, but one tracked step at a time.

Clipboard manager apps do exist, allowing for multi-copy and paste and copy and paste history, but they’re all rather limiting because they’re not built into the UI.

Apple could change this in iOS 13, and it’s another way in which productivity on the iPad could be enhanced. Having a full clipboard manager work at the system level would also help prevent copying over what’s in our clipboard currently.

iOS 13 needs better SPAM call blocking. Absolutely needs it in 2019. It’s one of the best features of the Google Pixel 3 and Pixel 3 XL, yet the increasing nuisance of telemarketers persists on the iPhone.

Okay, last year’s iOS update did at least add a call blocking and identification option. But users have to invest in an app (that often costs money annually) to get good SPAM call blocking protection. Apps like Hiya cost $2.99/month or $14.99/year for premium service.

The good news is that we see a big shift happening. Verizon is making its SPAM and robocall feature free starting in March, and Apple was recently issued a patent for this sort of feature.

Connecting to new WiFi networks or Bluetooth devices without exiting the app you’re using is impossible. Sure, Control Center allows you to toggle WiFi and Bluetooth on and off via this drop down menu, but switching between connections requires you to dive into the Settings menu and submenus. That’s rather annoying. 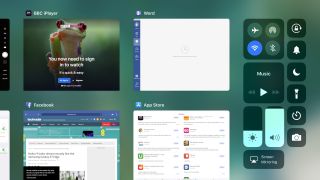 iOS 13 could easily change this, with another frosted overlay menu that lets you pick your connections without kicking you out of your current app. This would be especially handy when traveling and constantly cycling through multiple open WiFi networks. It’d be a shortcut within a Control Center shortcut, and we’d be okay with that.

iOS 13 is still several months away, even in beta form. However, as we get closer to Apple’s WWDC 2019 keynote in June, we expect more leaks to emerge about what the company is working on. If they do pop into the news, we’ll report on them here.

We’ll have to wait for the final version of UI, likely in September with an iPhone 11 launch event. However, the potential iOS 13 features above give you an idea of where the iPhone and iPad software could head in 2019.

The Surface Studio 2 just came out a couple months ago, with a 7th-generation Kaby Lake Intel processor designed for laptops and high-end Nvidia Pascal graphics. It’s a computer designed…

Just yesterday, International Data Corporation (IDC) revealed that India was at an all-time high in 2018 as far as smartphone shipments were concerned. With over 142 million smartphones being sold…

The Samsung Galaxy S10e is set to launch on February 20 alongside its more powerful – and more expensive – flagship siblings, the Galaxy S10 and Galaxy S10 Plus. However,…

Xiaomi’s wearables may not offer all of the top-end tracking tech you’d find in the Fitbit Charge 3 or a Samsung Gear Fit 2 Pro, but its Mi Band 3…

In the largest deal to date in the quickly growing electronic payments industry, Fidelity National Information Services (FIS) has announced that it will acquire Worldpay for around $35bn. While other…