Mention McDonald’s to someone today, and they’re more likely to think about Big Mac than Big Data. But that could soon change: The fast-food giant has embraced machine learning, in a fittingly super-sized way.

McDonald’s is set to announce that it has reached an agreement to acquire Dynamic Yield, a startup based in Tel Aviv that provides retailers with algorithmically driven “decision logic” technology. When you add an item to an online shopping cart, it’s the tech that nudges you about what other customers bought as well. Dynamic Yield reportedly had been recently valued in the hundreds of millions of dollars; people familiar with the details of the McDonald’s offer put it at over $300 million. That would make it the company’s largest purchase since it acquired Boston Market in 1999.

The burger giant can certainly afford it; in 2018 alone it tallied nearly $6 billion of net income, and ended the year with a free cash flow of $4.2 billion. But that still doesn’t address the bigger question of why. For that, you have to head to the drive-thru.

McDonald’s serves around 68 million customers every single day. The majority of those people never get out of their car, opting instead to place and pick up their orders at the drive-thru window. And that’s where McDonald’s will deploy Dynamic Yield first.

Over the last several years, you may have noticed that the displays as you approach the McDonald’s drive-through—and inside the restaurant, for that matter—have gone digital. That’s just one of several significant, data-focused investments that both McDonald’s and its franchisees have made since CEO Steve Easterbrook took the helm in 2015. The company also launched an app and partnered with Uber Eats in that time, in addition to making a number of infrastructure improvements. It even relocated its headquarters less than a year ago from the suburbs to Chicago’s vibrant West Town neighborhood, in a bid to attract young talent.

Look at the Dynamic Yield acquisition, then, not as the start of a digital transformation, but as the catalyst that evolves it.

“What we hadn’t done is begun to connect the technology together, and get the various pieces talking to each other,” says Easterbrook, in an exclusive interview with WIRED. “How do you transition from mass marketing to mass personalization? To do that, you’ve really got to unlock the data within that ecosystem in a way that’s useful to a customer.”

Here’s what that looks like in practice: When you drive up to place your order at a McDonald’s today, a digital display greets you with a handful of banner items or promotions. As you inch up toward the ordering area, you eventually get to the full menu. Both of these, as currently implemented, are largely static, aside from the obvious changes like rotating in new offers, or switching over from breakfast to lunch.

But in a pilot program at a McDonald’s restaurant in Miami, powered by Dynamic Yield, those displays have taken on new dexterity. Algorithms crunch data as diverse as the weather, time of day, local traffic, nearby events, and of course historical sales data, both at that specific franchise and around the world. In the new McDonald’s machine-learning paradigm, significant display real estate goes toward showing customers what other items have been popular at that location, and prompting them with potential upsells. Thanks for your Happy Meal order; maybe you’d like a Sprite to go with it.

“We’ve never had an issue in this business with a lack of data,” says Easterbrook. “It’s drawing the insight and the intelligence out of it.”

McDonald’s was reticent to share any specific insights gleaned so far, or numbers around the personalization engine’s effect on sales. But it’s not hard to imagine some of the possible scenarios. If someone orders two Happy Meals at 5 o’clock, for instance, that’s probably a parent ordering for their kids; highlight a coffee or snack for them, and they might decide to treat themselves to a pick-me-up. And as with any machine-learning system, the real benefits will likely come from the unexpected.

“When you look at the answers that this decision engine provides, it may not seem so obvious to begin with, but for customers it makes sense. It’s not just about the individual, it’s also taking training information from other customers,” says Daniel Henry, McDonald’s executive vice president and global chief information officer. “It’s only going to get smarter and smarter, the more customers interact with it.”

McDonald’s defines those customer benefits broadly. Multiple executives noted that if the drive-thru is moving slowly, the menu can dynamically switch to show items that are simpler to prepare, to help speed things up. Likewise, the display could highlight more complex sandwiches during a slower period. And as with any online checkout experience, it’s unlikely that the drive-thru window will tell you that you’ve actually ordered too much. While customer satisfaction may be the goal, the avenues McDonald’s takes to get there will increase revenues along the way.

Think also beyond the store itself. A company that amasses as much data as McDonald’s will find no shortage of algorithmic avenues. “Ultimately you can see we’ll be able to use predictive analytics—we’re going to have real-time information, as we start to connect the kitchen together—further back through our supply chain. I’m sure that will happen,” says Easterbrook. “That isn’t part of this particular technology, but as you start to link the predictive nature of customer demand all the way through your stock levels in the restaurant and the kitchen, you can almost flex it back down through the supply chain.” He notes that McDonald’s is a high-volume, low-margin business; anything that helps cut down on waste makes a big difference.

And given the scale at which it operates, any supply chain shifts at McDonald’s tend to ripple throughout the entire food industry. Which gives you a sense of just how transformative this acquisition could be.

As you might have guessed, McDonald’s didn’t spend over $300 million on a machine-learning company just to juice its drive-thru.

Henry says he expects to see the technology in 1,000 locations within the next three months, eventually rolling out to the company’s 14,000 US restaurants and beyond. You can also expect McDonald’s to integrate its new machine-learning smarts not just broadly but deeply, albeit at a measured pace.

An important part of that focus is figuring out how to leverage the “personalization” part of a personalization engine. Fine-tuned insights at the store level are one thing, but Easterbrook envisions something even more granular. “If customers are willing to identify themselves—there’s all sorts of ways you can do that—we can be even more useful to them, because now we call up their favorites,” according to Easterbrook, who stresses that privacy is paramount.

As for what form that might ultimately take, Easterbrook raises a handful of possibilities. McDonald’s already uses geofencing around its stores to know when a mobile app customer is approaching and prepare their order accordingly. Easterbrook suggests you could extend that, in a strictly opt-in capacity, to the smartphone itself, using a sort of beacon technology. Or, he says, license plate recognition could let the system identify a specific customer as they approach, and adjust the digital menu accordingly based on their purchase history.

Consumer appetite for that sort of tracking remains to be seen, especially when awareness of the value and sensitivity of personal data has reached new heights. “We will be very sensitive as we learn, as we go forward,” says Easterbrook. “I think over time it’s going to be important to demonstrate that we can offer value back for customers willing to open themselves up to us.”

And then there’s Dynamic Yield. Founded in 2011, the company has headquarters in New York as well as Tel Aviv, and a healthy roster of blue-chip retail clients, including Ikea, Sephora, and Urban Outfitters. It will remain independently run even after the acquisition, and plans to continue growing its business outside of the Golden Arches’ shadow.

“We’re going to still stay scrappy,” says Dynamic Yield cofounder and CEO Liad Agmon. “I think that our customers will benefit from it in many ways. One is you remove the startup risk from the table. We don’t have to seek funding any longer, and we can focus on innovation. Also the risk of Dynamic Yield being swallowed into some legacy software play is out of the question.”

McDonald’s vetted around 30 firms offering similar personalization engine services, and landed on Dynamic Yield after proving out the technology in the Miami pilot. “It’s probably less about the product and more about the data scientists that come with it, the people that come with it, and their ability to move quickly with us,” says Henry.

Dynamic Yield essentially adds a personalization layer to the McDonald’s technology stack. The software that powers the display makes an API call with each order, and Dynamic Yield returns the results. That seamlessness has the added benefit of requiring little additional investment from McDonald’s franchisees to implement. The expensive part was the digital signs themselves.

The prospect of taking on 68 million fast-food customers a day doesn’t bother Agmon, who notes that McDonald’s won’t put much stress on the system compared with the world of online shopping, which operates on a much larger scale in terms of both orders and items to sort through. The tie-up does, though, underscore just how blurred the lines between the physical and digital worlds have become.

Which helps explain why McDonald’s has made a tech company by far its most substantial acquisition in two decades. You’ve seen decision logic at work every time you shop online; now it’ll buttress your Extra Value Meal.

“We’re a really straightforward business. People only come to us if they want something to eat, or something to drink,” says Easterbrook. “We’re not in the business of using technology to try to change people’s lives.”

Space Habitat NASA’s 3D-Printed Habitat Challenge that kicked off in 2015 has challenged teams around the U.S. to render, prove the structural integrity, and construct a model of a habitat…

Giant Beanstalk In agriculture, scientists have used genetic engineering to create hardier and more nutritious crops for decades. Now researchers are gene-hacking plants to make them gigantic — an area of research… 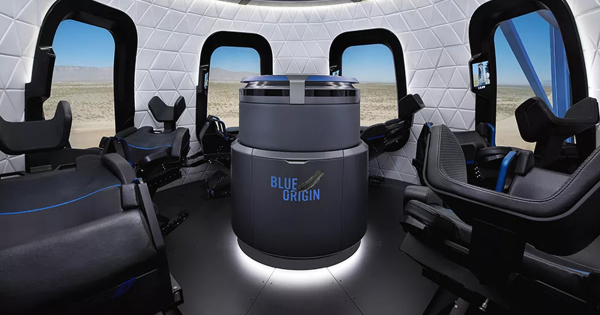 Race to Space Amazon CEO Jeff Bezos wants to send its first passengers to space as soon as this year. Bezos spoke during a private event at the Yale Club…