You can’t buy the watch online, but you can customize its look on the official Louis Vuitton website before buying it over the phone or in an official store.

Original story: It’s commonplace for fashion houses to experiment in the world of smartwatches, and one of the most inventive we’ve seen so far has been Louis Vuitton, which is now back with a new watch.

We’ve previously heard details of the Louis Vuitton Tambour Horizon, but an official announcement from the company has given us a much clearer idea of the spec to expect on the Wear OS watch.

We first heard the company would be developing a new watch at the launch of the Snapdragon Wear 3100 chipset late last year, and the new Tambour Horizon has this chipset inside.

That makes this one of the first smartwatches – alongside the Fossil Sport and Montblanc Summit 2 – to feature the updated tech from Qualcomm.

One of the first

This watch is set to feature a 1.2-inch AMOLED display with a resolution of 390 x 390, as well as 1GB of RAM and 8GB of storage. Those last two specs are a significant upgrade compared to the last generation Tambour Horizon watch, which had 512MB of RAM and 4GB of storage.

Even though the watch has a larger screen, the company has opted for the same size of battery. It’s 300mAh, but if the Snapdragon 3100 chipset makes good on its promises that will mean similar – if not, better – battery compared to the last-generation watch.

In terms of the design, the watch has a ceramic casing with sapphire glass on the front. It’s 42.9mm in diameter and is 12.6mm thick, plus you can swap out the straps. 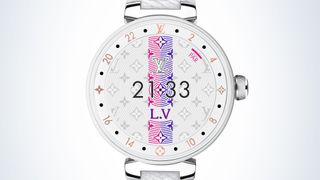 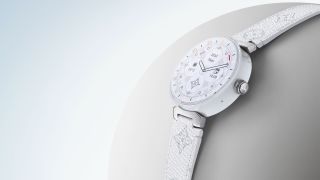 Fitness features are lacking on the watch, but it’s unlikely you’ll be buying this to take it out for a jog. There’s no GPS or heart rate tracker onboard, but it can go into water at depths of up to 30 meters, which is likely there more for durability than anything else.

There is an NFC chip inside the watch, which means you’ll be able to use Google Pay for contactless payments. It will also run the latest Wear OS software.

Alongside the normal version of the watch there’s a special edition listed as Tambour Horizon Pure White & Diamonds. All we know so far about this model is that the spec list says it will feature 34 diamonds, so if you want something with a bit of sparkle on your wrist this may be a good choice.

We don’t currently have price or release date details for the Tambour Horizon 2019, but you can expect it to be expensive. The last-gen watch started at $2,490 / £1,960 (about AU$3600), so if you want one of these, you will likely have to pay a lot for the privilege.

Best ergonomic office chairs We’re quite prepared to spend perhaps thousands of pounds on PCs, tablets or phones, and maybe a good chunk of money on a huge 4K eye-friendly…

In 2019, you need one the best laptops – you can’t avoid it. However, you only have one reason to go with the best 13-inch laptops – they’re the ideal…

At this year’s Oktane19, Okta announced the launch of its new $50m investment fund, Okta Ventures which will help solve challenges across the modern technology landscape with an emphasis on… Best drawing and painting software For thousands of years, art has remained an important part of human culture and expression. But, of course, it has undergone a great deal of…