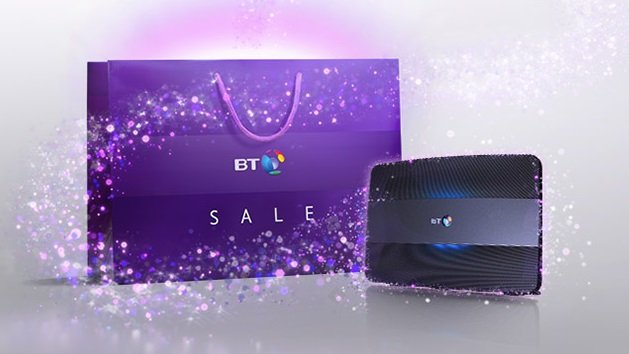 BT must have been feeling the festive cheer over this Christmas week as it’s handing out the freebies in its January Sale broadband deals. Sign up with BT Broadband now you can get a hefty reward card worth up to £120 and absolutely free activation.

The most popular internet provider in the land, BT’s broadband plans are many and varied. Our top pick is its Superfast Fibre Unlimited Broadband deal. It costs £29.99 per month and you get a whopping £100 pre-paid Mastercard. The only thing you’ll pay at the outset is £9.99 to cover the delivery of your new router. You also get free calls to UK landlines at the weekend.

If that’s a little pricey for you, then BT’s standard 10Mb ADSL costs a mere £24.99 and BT still throws in a £60 BT Reward card and you get 200GB Cloud storage. A worthwhile investment for 2019. Or there’s more speed available as well if you’re concerned that the amount of people all streaming and surfing at once in your house will put too much of a strain on your connection.

Scroll down to see these deals in full or if none of these offers were the Christmas broadband gift you were hoping to unwrap, check out our best broadband deals page for all of your options.

BT Superfast Fibre 2 | 18 months | Avg. speed 76Mb | Weekend calls | £9.99 router delivery | £39.99pm + £120 reward card
For an extra tenner a month you can really boost the average speeds your getting. This is ideal if you have loads of people in your household all trying to use the internet at once or if you stream a lot of 4K content or do a lot of gaming. You immediately shave £120 off the price with BT’s massive Reward Card.
View Deal

BT Broadband | 18 months | Avg. speed 10Mb | Weekend calls | £19.99 upfront cost | £24.99pm + £60 reward card
You can get BT’s Standard broadband for under the £25 a month-mark with average speeds of 17Mb. Not only are you with one of the UK’s most popular broadband providers but like all the other deals above you get a free BT reward card, this time worth £60.
View Deal

A few months ago rumors circulated about an all-digital Xbox One S console. It was reported at the time that the system didn’t have a disc tray, and would instead…

If you’re anything like us, you’ve been riding high on the discounted retro revival game consoles over the past few months. The latest to join the party is video game…

Shipments of wireless power transmitters and receivers will rise to 7.5 billion within a decade, according to new figures from IHS Markit. Wireless charging has been available in smartphones and…