I’m a turtle. My hands, which until a second ago were holding a pair of HTC Vive controllers, have been replaced by a pair of flippers, and instead of sitting on a swivel chair in a university classroom, I’m now submerged in a deep tropical sea.

Getting my bearings  I use my new-found flippers to push myself towards a pink jellyfish a few meters below me. As I reach it, it disappears – eaten.

I paddle forward and devour a few more, then spot something drifting in the water to my left. I swim closer. It doesn’t look quite like my previous meals, but it’s pretty similar. I decide to give it a nibble – and my vision dims. The object I just tried wasn’t a tasty treat – it was a plastic carrier bag, and I’m turtle soup.

It’s a striking demonstration of the effect of plastic waste on our oceans, and it was created by a student just three months into an MA in virtual reality at London College of Communication (LCC – part of University of the Arts London), which has invited TechRadar along for the day.

The course is one of the first of its kind in Europe, and teaches VR modeling, environment design, 360-degree video capture, game development, and how to make 3D augmented reality apps. There are theory elements too, teaching students how to use VR for effective storytelling.

“For students, I think it is the great opportunity to be at the forefront of a field that is only now being defined,” says course leader Ana-Despina Tudor. “They will be the ones shaping what VR will look like in the future, and it’s great to be able to shape your field like that. Not many students and academics can say that. Also, studying at LCC gives them the opportunity to access other resources from countless other courses that they can use to create their VR vision. So I’d say we are at the right place at the right time.”

LCC clearly believes virtual reality is here for the long-haul, and its facilities are impressive. In addition to a classroom full of high-powered PCs and tethered headsets for students, the college also has three movable ‘cells’ – steel gantries equipped with HTC Vive base stations for full-body motion tracking. I’m allowed to spend a little time doodling in Tilt Brush (which the students often use for storyboarding in three dimensions). The edge of the gantry appears as a wireframe, so I don’t accidentally stray outside while getting creative.

The college chose Vive headsets due to comfort and ease of use, and for its ability to handle room scale. The system only requires two Lighthouse base stations (unlike Oculus Rift, which needs three cameras for 3D tracking). These are effectively ‘dumb’, sending out an infrared pulse that’s detected by sensors on the headset and controllers, and can be set up wirelessly, eliminating the need for complex wiring that would need to be changed each time the gantry was moved. 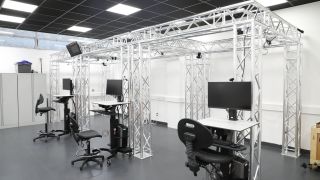 LCC originally planned to kit out its classrooms with less expensive Oculus Rifts, but changes to commercial licensing meant it made sense to stick with HTC there as well.

In addition to all this premium kit, students also have access to LCC’s professional-grade facilities for creating visual effects, including one room that houses a vast green infinity cove for chroma keying, and will soon have a render farm at their disposal.

“For me it’s very exciting to be able to use VR every day in teaching and in research,” says Tudor. “Also, I think that our collaborations with external partners in this course are extremely valuable, because they help us get the pulse of the outside world: what do creatives need, how do they work with VR, what are their expectations from VR?”

Some critics are still adamant that the current generation of VR is a flash in the pan – perhaps like 3D televisions, which never really took off – but Tudor disagrees. “I don’t think that VR is going to disappear any time soon – there is an ecosystem around it that was missing in the late 90s when VR went into oblivion last time,” she says.

“There are engines for content development, a lot of headset types – among which quite affordable ones, and computing power. So I think it will need to find its place in certain domains, but it’s here to stay.” 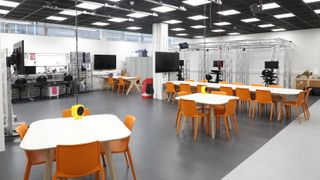 That certainly aligns with what we saw at CES 2019 recently. On the show floor, VR’s future looked brighter than ever. We got our first glimpse of a new 8K ultra-wide VR headset from Pixmax, virtual reality streaming for Facebook with Oculus Rift,

Meanwhile, on the streets surrounding the show venue, Audi was demonstrating Holoride – a virtual reality experience for car passengers that incorporate the vehicle’s telemetrics, which has the handy side-effect of cutting motion sickness by matching up the signals from your inner ear with what you see.

With all that in mind, how mainstream will VR become? “It depends a lot on the field where VR is being used,” said Tudor. “If we speak of education, VR has great potential to become a regular teaching and practice tool where complex concepts can be explained easily through amazing visualisations, and through which one can train specific skills, such as performing surgeries, for instance.

“If you look at games, its popularity has increased and games platforms report growing number of VR users. For VR to become mainstream it has to draw people back to use it regularly, not just for a one-off experience.” 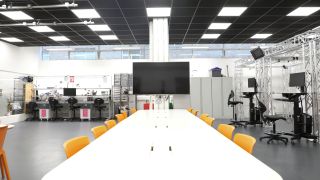 Tudor also has some advice to offer if you’re thinking of making your first foray into virtual reality yourself, but aren’t sure where to begin:

“There are a lot of types of headsets that can be more or less comfortable and easy to use. The same goes for VR content, which varies greatly in terms of quality.

“My advice is to keep trying headsets and keep seeing as much VR content as you can. I’ve seen some of the best VR experiences at film festivals and in art galleries, so that can be a good starting point, because the content is well-curated and the technology is well chosen.”

For more tips, see our guide to the best VR headsets of 2019.

Ultimately, choosing a degree program depends on a combination of factors, including innate interests and abilities, as well as future employability, but the skills taught in a VR course are certainly in demand right now.

With that I mind, I ask Tudor where she sees VR in three years’ time – after the current cohort of students have entered the workforce.

“I think the near future will bring improved content: improved stories, improved interactive experiences and hopefully apps where people can make their own VR content,” she says. “At the moment we are at the very beginning of a long journey.“