Smartphones have long evolved from being just calling and texting machines, it’s where most of us consume digital entertainment and get things done. According to AdColony, 60% of UAE smartphone users watch online videos on their phones daily and almost half prefer watching movies on their phones. Add to the fact how most users are increasingly replacing desktops with their smartphones for work-related tasks and small bouts of gaming and it becomes clear why most people these days opt for phones with larger displays.

When it comes to phone screens, size really does matter. Choosing a screen that’s just one inch larger than your current device makes all the difference and will result in a much better mobile experience whether you’re viewing content or playing games.

While there are many phones with larger screens, there’s always some kind of compromise involved such as middling battery life or overheating while running demanding apps resulting in performance dips. Manufacturers have yet to bring their A game to supersized devices and Huawei decided to lead that with its latest Mate 20 X which makes no such compromises.

Super-sized with no compromise

The Mate 20 X offers tremendous amount of power and stamina on a larger screen than most max-sized phones making it perfect for being productive, viewing content or having an intensive gaming session. It comes packing a 7.2-inch Full HD display, a blazing fast and power-efficient Kirin 980 processor, 6GB RAM and a hefty 5,000 mAh battery that keeps going. As for the camera, it’s the same excellent versatile setup found on the Mate 20 Pro which our viewers voted as their favorite camera phone for 2018.

There’s also a revolutionary cooling system on board, which uses graphene film and vapor chamber to ensure the phone dissipates heats efficiently while maintaining high performance. This is especially useful when you turn on GPU Turbo 2.0, Huawei’s key performance enhancing feature that pushes the Mate 20 X’s hardware to get accelerated performance while reducing battery consumption. 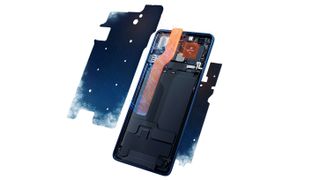 This is great news for mobile gamers who can enjoy extended hours of gaming on the highest graphics settings with smoother frame rates. The audio on the Mate 20 X is also excellent with two well-placed speaker grilles on the top and bottom that emit high quality stereo sound. That combined with a large screen and powerful GPU performance give users a completely immersive and premium mobile experience. And yes, it also has a 3.5mm jack for plugging your favorite pair of headphones if you want to enjoy gaming discreetly.

One concern with most max-sized and gaming-centric phones is the middling battery life. Most large phones rely on a battery capacities below 4,000mAh to power screens as large as 6.5-inches and they usually fail by not being able to provide even one full day’s worth of moderate usage. But with the Mate 20 X’s massive 5,000 mAh battery, users can kick that habit and never worry about running out of juice.

Apart from the sizable battery that’s more than enough to power the 7.2-inch screen of the Mate 20 X, the phone is also equipped with an extremely power efficient chipset and battery optimization software that gives users almost two days of battery life. Power users can keep on gaming and watching content without battery anxiety and the phone will still outlast them between recharges.

It is clear that Huawei’s focus on consumer needs and innovation has resulted in another brilliant offering from the tech giant. The supersized Huawei Mate 20 X offers the best-in-class tech with no compromises at an unbeatable value making it a standout device for an immersive multimedia experience.