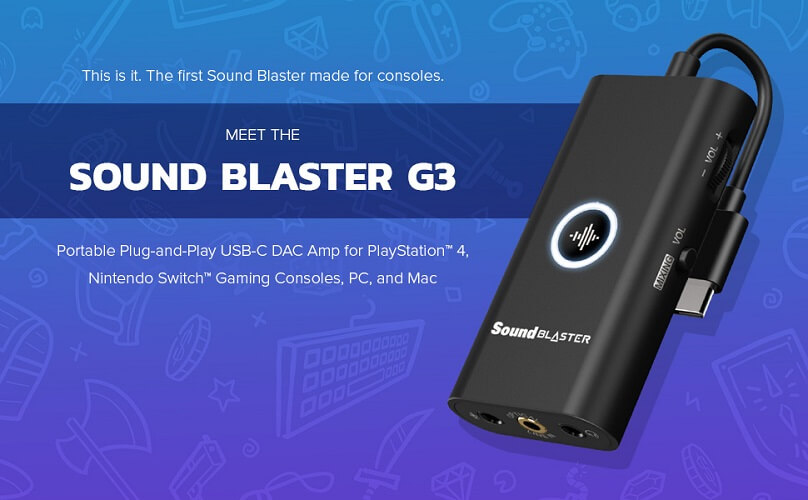 Welcome to our Creative Sound Blaster G3 Review. In this article, we review Creative’s Sound Blaster G3 – one of the best accessories for gamers that will drastically enhance your audio quality. 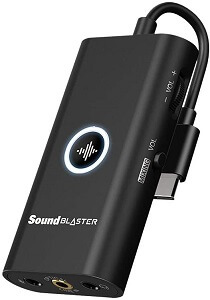 Powered entirely via USB-C in a plug-and-play driverless format, the Sound Blaster G3 is a hassle-free instant audio upgrade for your gaming consoles (PS4 and Switch), and well as PC and Mac computers. Featured with USB audio, simply connect the G3 to your gaming console via USB-C (or the provided USB-C-to-USB-A converter), and it will work straight out of the box. There’s absolutely no fiddling with extra settings or installation to get started.

Creative with the Sound Blaster series continues to make history, having behind it a long history of 30 years or more. This great experience is also an important legacy for Creative Labs, as it has enabled its people to experiment in other categories of audio products, in addition to traditional sound cards that upgrade the sound on our PCs.

This category includes the Sound Blaster G3, a USB DAC (Digital/Analog Converter) sound card, connected in a direct and easy way to PlayStation 4 and Nintendo Switch (via USB type C, while the Type-A adapter) is also compatible with PC and Mac.

By allowing the on-the-fly connection without the need for drivers or installing special software, the logic behind Sound Blaster G3 is that it can provide an important boost to your audio experience, as by plugging your headphones (as long as they have Mini Jack) into it, you will have sound classes superior compared to before, but also some extra sound features that as they turn out will give you many advantages at gameplay level.

Tiny in dimensions (even fits in the back pocket of your jean) and weighing just 32 grams, the Sound Blaster G3 is transported literally everywhere, while making an ideal match with the Nintendo Switch when it’s in portable mode.

Observing its exterior design, virtually every side of it is carefully “crafted” by the creative lab’s design team, so as to give comfort and ease of use (and of course on-the-fly handling which is also the point).

On one side we essentially have the microphone settings (with a washer that increases the volume and a button turn it on or off) and on the other side, we control anything that concerns the adjustment of balance and the mixing of sound.

Special importance is given to the button that enables the user of Sound Blaster G3 to determine whether he wants to adjust the volume that reaches the user’s ears or the mixing of sound, “playing” depending on the washer adjacent to it.

In addition, on the bottom side of the Sound Blaster G3, you will find an optical line-in port, as well as the audio ports for the microphone and headphones. Finally, on the back, there is a button with an illuminated ring, which activates the footsteps enhancer mode (which we will analyze further below).

Creative’s portable DAC proposal offers upgraded hi-definition sound at 24-bit (100 dB DNR), as well as a number of special features, but they are clearly moving towards a more budget-friendly orientation.

For example, a gamer can very easily control the mixing of sound between chat and the sound of the game, a feature that seems some people consider to be of little importance, but the truth is that it will put him in an advantageous position when he plays his favorite online shooter and there is panic on the screen.

Even more so, the ability for 7.1 sound virtualization also belongs to one of the features that will appreciate all those who seek something more while they pour infinite sweat into their online gaming sessions.

Creative Labs with the creation of the Sound Blaster G3 went a step further, as it introduced Footsteps Enhancer, which essentially allows you to hear the pacing of the approaching opponents.

Of course, this feature concerns specific games, especially shooters, where the idea behind it is that with a single press of the special button, the bass disappears completely and giving a boost to treble sounds the player can better perceive and hear the steps of his enemies.

Although with Footsteps Enhancer the sound performance decreases sharply, it does work with the above, offering greater depth in gameplay, as you will always have in your pocket the element of surprise. In particular, if you melt into Fortnite, Call of Duty, and Overwatch you are sure to love the function: Footsteps Enhancer.

Of course, Creative Labs’ excellent development team couldn’t help but give weight to developing an extremely useful application that gives even more control to your hands and gives more options for more personalized results.

Downloading to your smartphone, the Sound Blaster Command mobile app (available for iOS and Android), you don’t even have to stop playing to make the audio settings, as the Sound Blaster G3 connects via Bluetooth to work, and from there begins a mini-paradise of settings for audiophiles and detail enthusiasts.

Essentially your smartphone is transformed into a portable audio control, where you are given the ability to adjust volume and mic controls, create or save EQ settings and even carry out firmware care.

On your PC or Mac, the Sound Blaster Command desktop app walks the exact same steps of perfection of the personalized audio experience that all Creative products give us.

Completing our experience with the Sound Blaster G3 we do not hide from you that we were thrilled with the technological excellence and ease of use it offers.

With the easy-to-use Sound Blaster G3 the sound quality is upgraded in every game and in many cases we found that the sound was day and night. Where Creative’s proposal can be considered “golden” is in multiplayer games that undoubtedly with the enriched features offered by G3 take it to another level!

With an admittedly fairly affordable price, less than 50 dollars, the Sound Blaster G3 is arguably your best (and most economical) ticket in a truly upgraded gaming audio experience! 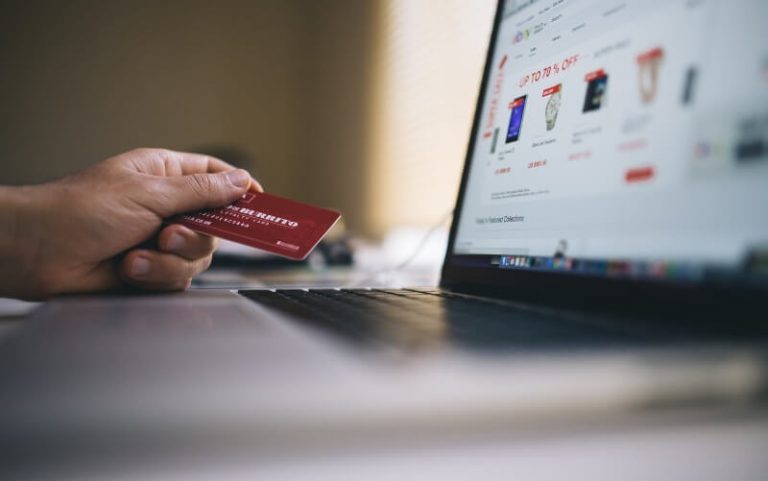 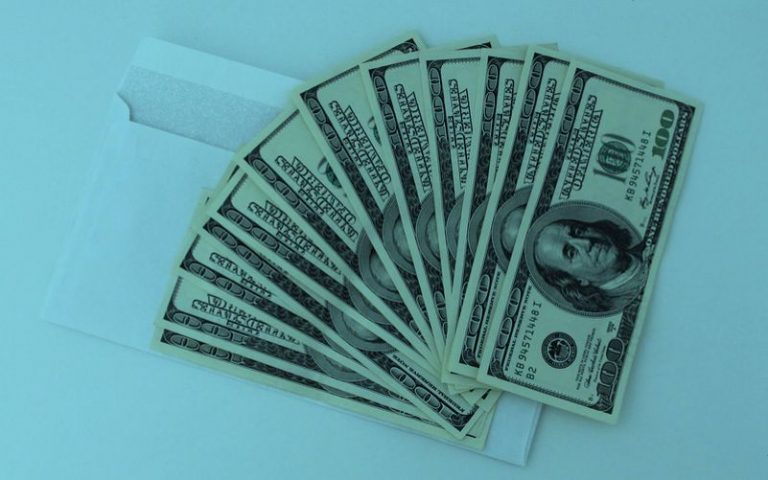 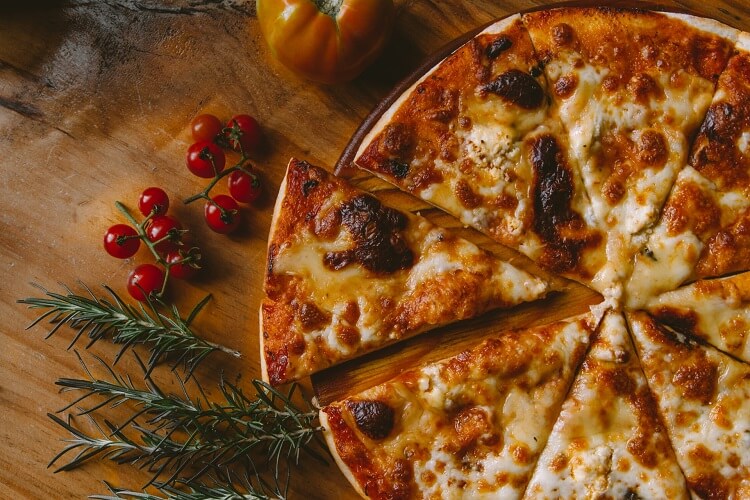 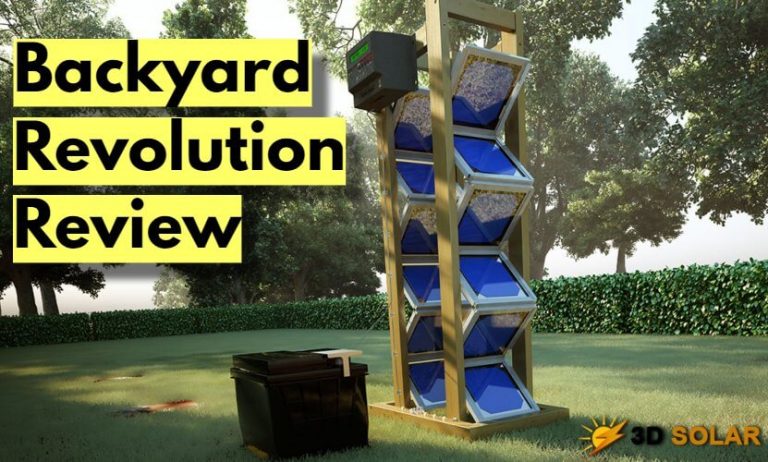 Our friends at PC Gamer broke the news this morning that their annual E3 event – the PC Gaming Show – would return in 2019. The event is scheduled for…

At CES 2019, Alienware announced the Area-51m, a gaming laptop that doesn’t just pack the latest and greatest specs – it’s also upgradable.  The Alienware Area-51m is the latest flagship… 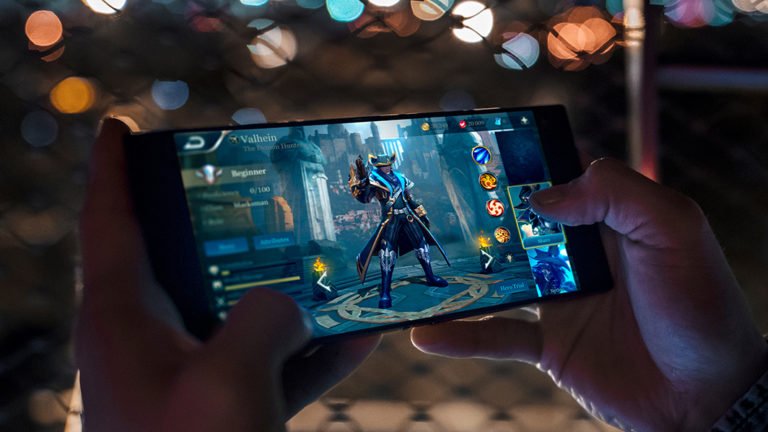 A while back it was rumored that Samsung was building a gaming smartphone and now that claim has popped up again, but from a different source. This time it’s I…